QMobile mobile has launched another new smartphone series named A-series and make a debut with QMobile Noir A3 and QMobile Noir A6. We have chosen Noir A3 for review. It’s a mid-range smartphone with one of most dominant feature that is addition of fingerprint sensor. QMobile always aim to bring advanced technology at affordable price and that’s point which makes the QMobile No.1 selling brand in Pakistan. The other specifications include 720px HD IPS display panel, 1.3 GHz quad core processor, an elegant 8MP rear camera and 5 MP front camera. The smartphone is now officially available all around the Pakistan at very affordable price of PKR. 14,500/-. Let’s have detailed review of QMobile noir A3.

The Noir A3 comes in an eye-catching cream color retail package inside you’ll find the usual set of accessories, but nothing special. There is 5V/1.0A charger with a rather short USB-to-microUSB cable. The headphones have produce quality sound and bass sound is key feature of headphone.

Price and Specifications of QMobile Noir A3:

Design and Display of QMobile Noir A3:

QMobile Noir A3 packs 5.0” HD IPS capacitive display panel on the front which have decent 720 x 1280 px resolution. The brightness can be set manual or automatically by light sensor. The upper and lower portion of display has blackish pixels which looks fine and will remind to Huawei’s displays. The capacitive display supports 5-point multitouch. As the display is 720 pixel, so the calculated No’s of dpi is 320 which help to reduce the viewing angle issues. QMobile Noir A3 is a mid-range smartphone from QMobile; 720px displays are in fashion nowadays for midrange and another plus point for 720 display is a battery friendly nature as it sucks much less battery from 1080px. 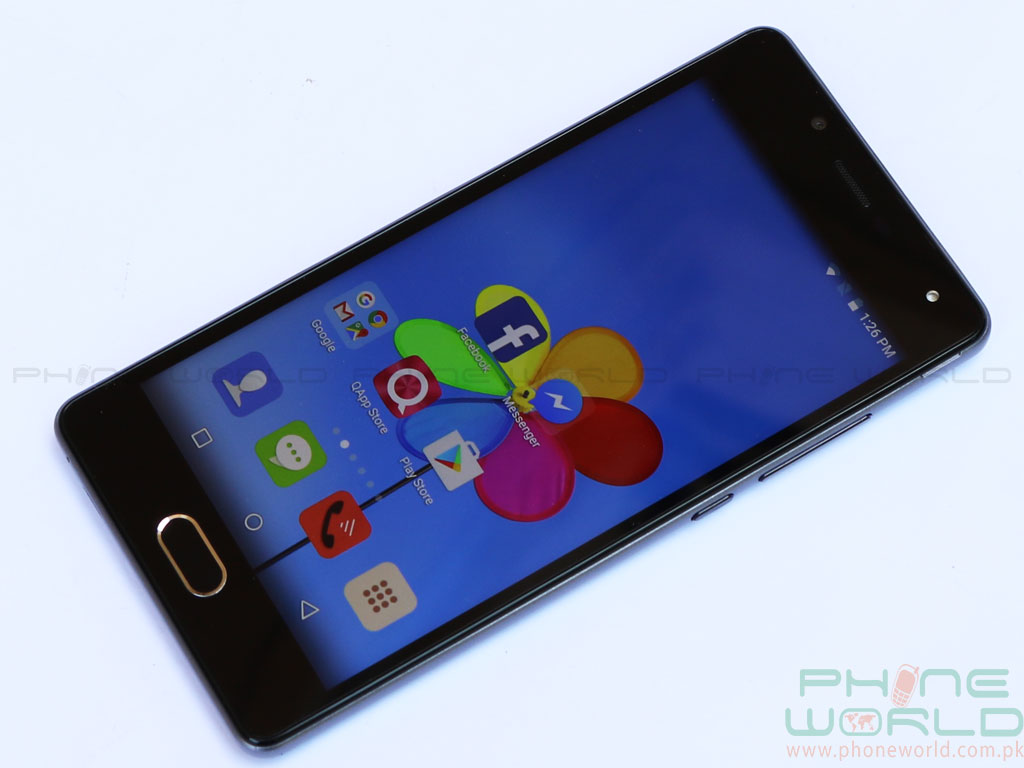 Design and Display of QMobile Noir A3:

The upfront is packed with intuitive HD IPS display which we have discussed in detail in above section. The virtual navigation buttons are inside the capacitive screen. Don’t worry about screen size as the virtual button do not capture area of display. They appear by swiping up on bottom of screen, when it need to be used and go disappear if not use for a while.

The upper portion of display as usual home to earpiece place in middle, front 5 MP Selfie shooter can be seen on the left of ear piece and LED flash is on right corner. The couple necessary sensor are there along with Notification LED which can only be seen if active.

The bottom of front has oval shape physical capacitive button which is indeed a finger print sensor and perform some dedicated task. Tap over button take you back and double press over button appears home screen, however long press over the button open up Google chrome.

On right side Noir A3 carries home and power button. The buttons are placed in upper area and easily accessible with right thumb. The top edge has nothing but audio jack is at top right corner.

The bottom is home to microUSB port and standard microphone for capturing voice. Both instruments are pushed towards left.

Now turn it back, QMobile Noir A3 metallic color back cover. The back cover has two strips at top and bottom which have no technical reasons which give decent look to phone. 8MP rear camera and LED flash are fixed in circle shape cut out, rear camera is slightly elevated providing more space to lens for zoom. The bottom portion has QMobile branding and 6-pinholes for speaker sound to go out.

Memory for QMobile Noir A3:

QMobile Noir A3 is a mid-range smartphone that packs with 2GB Ram and 16 GB internal memory out of box, which is good combination for a mid-range smartphone. 2GB is enough to assist Quad core processor in processing. 16 GB internal storage is quite enough for accomodating your personal data. Just in case if you are running out of memory space –MicroSD slot supports upto 64GB SD-card.

Camera within QMobile Noir A3:

Noir A3 features 8 MP rear camera and 5 MP front camera while both are supported by LED flash. The camera App is quick and responsive. Interface of camera App is simple and understandable. The upper portion of app has four icons that are Settings, Pre-defined modes, flash controller and camera switcher toggle.

The lower portion of Application has small preview of previous captured image, next to the preview there is image capturing toggle and last one is video recording button.

The settings toggles pop up settings layout. It has 12 different type setting options however few are named here; Video Quality, Picture Size, Self-Timer and much more.

Rear Camera of QMobile Noir A3:

QMobile Noir A3 supports 8MP camera along with LED flash placed at middle of top on the back. The camera has pretty decent result, the images captured with Noir A3 are clear and colors are well managed too, however the low light photography is bit noisy. The camera has Auto focus and touch focus feature which works fine with it.

Front Camera of QMobile Noir A3:

Noir A3 has 5MP front selfie shooter and thanks to LED flash that make low light selfie possible. The selfie camera can capture good selfie and also make HD videos with 720p resolution. The camera quality is fair and can work to fulfill the need of user. There are some pre-defined modes like Beauty and Wide Selfie mode for group selfie.

Network / Connectivity of QMobile Noir A3:

QMobile Noir A3 is dual sim 4G enabled smartphone which supports all the network bands in Pakistan. The physical connectivity includes MicroUSB 2.0 port, 3.5mm Audio jack and microSD slot that supports upto 64 GB. The wireless connectivity section has Wi-Fi 802.11, WiFi Direct, and hotspot, and Bluetooth 4.1; while there is not NFC. The smartphone has advance AGPS module for positioning.

Battery Performance of QMobile Noir A3:

QMobile Noir A3 is powered with 2500 mAh battery which is fixed. The battery has decent standby time that can work for 3 to 4 days on single charge. You may use it for 2 days on GSM network. While frequent messaging on GSM network, it can work for 8 to 10 hours. The 3G service like browsing, streaming and video call it will provide 6 to 7 works battery backup which is quite satisfactory.

Interface of QMobile Noir A3:

QMobile Noir A3 is operated by Android 5.1 Lollipop. The home interface resembles with Huawei’s EMUI. The lock screen show notification and digital clock and date. The lower portion of lock screen gives you privilege to make call and access camera App.

The home screen has strong resemblance with Huawei custom interface. It has three gadget on screen music player, Google search bar and Album. The home screen is composed of slides that allow you to bring shortcuts on home screen for more convenient use. The Application menu shows installed Apps in Alphabetical order.

As Noir A3 is provided with Finger print sensor, you have to first make sure that you finger is identified by mobile. It stores multiple fingers with different names which can use to unlock mobile screen, privacy lock, and Quick start. Noir A3 has pre-installed Phone assistant that keeps cleaning mobile memory and make sure it’s fully optimized.

Processor of QMobile Noir A3:

QMobile Noir A3 is packed with Media Tek MT6735, Quad core processor. It has 1.3 GHz, ARM Cortex-A53 chipset. The midrange processor which can handle 3, 4 Apps easily without any halt. We will check its performance in coming tests.

Noir A3 has Mali-T720 GPU providing smooth graphics experience while playing games in fact it plays GAMELOFT Asphalt 8 smoothly. Mali-T720 is comparatively more efficient and power saver than Mali-T600 and its newer version, too.

Antutu Benchmarking of QMobile Noir A3:

In Antutu bench marking, the smartphone proved itself as true mid-range smartphone –it got almost 31K+ points which shows QMobile Noir A3 can do well in processing, playing games etc. the smartphone stands at 15th position in comparison with 31K point. Thanks to its advanced Mali-T720 GPU which really improves the graphics which you can feel while using. The games run smoothly without any lag. The smartphone capacitive display supports 5-point multitouch.

Vellamo Benchmarking for QMobile Noir A3:

QMobile Noir A3 performed really well in Vellamo bench marking too. It got brilliant points in all three test. The single core performance put decent score 987 point on board and it is very close to beat Meizu MX 4 which has powerful processor.

The Multi-core test score is 1411, that is because of less no’s of cores but still better than many. With attained score it found place under the Asus Zenfone 2; which is kind of flagship device form Asus. The browser test is last in series, it got 2705 points and the Noir A3 is so close to class of Lenovo A7000. The score show it has very responsive browser.

Conclusion for QMobile Noir A3:

Well, we are at conclusion section to sum up our review and give you our final verdict. QMobile Noir A3 is a mid-range smartphone with decent specs and step forward toward latest technology adoptation. The finger print sensor is a remarkable addition that shows QMobile is keen to rule the market with new innovations. While talking about the price; No one can compete QMobile in price range. QMobile Noir A3 is available at price of PKr. 14500/-.