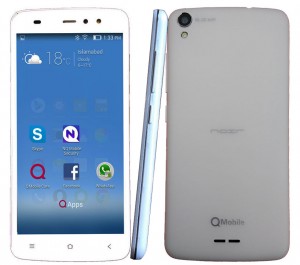 QMobile finally launches Noir X450 with its level best by keeping in mind all the fabulous aspects like a multi-tasker 1.3 GHz Quad-core Cortex A7 processor, 1GB Ram and 8GB Rom along with a battery of 1950 mAh and in a cute and smart look. System supports two SIMS at a time and Rom can be increased up to 32GB with just Rupees 14,000/=.

So the wait is over for you to grab a smartphone with high speed and efficient performance with long power backup.

QMobile Noir X450 Review with fly you to the good, better, best, cons and pros and a technical review along with a great many pictures and snapshots so that you may go through all the OS.

No need to mention any thing in the snaps below. The shape, size and grip is crystal clear.

The device can support up to 5 fingers consecutively. The power application has been made great and one can manage applications with his/her choice for better and long time.

One thing that irritates most of the people is the USB to PC cable connection. The problem has been solved with the options as shown in the snapshot below. No sooner the cable is added to PC, the USB to PC interface evolves for the user’s choice to make it either in the Charge only mode or File transfer mode. The interface for sending messages and dialing pad, both are used the typical / standard ones.

The camera has been loaded with many options as shown in the snapshot at the right. The browser also works fine and sound.

A device is better checked and tested if we drop it in the run for bench marking. Same is here what we have done, by checking all the chunks and angles with “The Three”famous bench marking applications with millions of millions of downloads, which are Antutu, Vellamo and a GPU testing application called GPU Bench mark.

Checking with Vellamo, the Qualcomm’s application that is used to check for the performance of single-core, multi-core as well as the browser, QMobile Noir X450 Review reveals that the device is best on its part.

The below images show the performance of overall cores of the processor, powering the QMobile Noir X450 in comparison with Samsung Galaxy S3.

Gaining more than 14 thousands score proves that the installed processor inside the QMobile Noir X450 is performing very good and is far more better than smartphones in the same price.

QMobile Noir X450 is a better set of choice for the people that wants to get a better smartphone with multitasking ability with a Quad core processor, 1 GB Ram and storage memory up to 8 GB that can be extended to about 32 GB in a price of just Rs: 14000