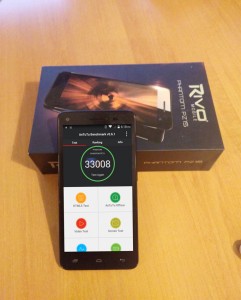 Rivo Mobile company has launched its smashing smartphone with awesome look and smartness of the smartest that is going to rock the market with its attractive features and affordable price.

This becomes the main reason that is gonna bubble up the Rivo Mobiles from the smartphone’s tub, not to the top but it is surely going to make space in the national market.

Rivo Phantom PZ15 Review is all about the features, smartness, 1.7 Octa-core processor, 2GB bulk Ram with 13MP Rear Camera and 5MP front camera and much more like dual sim and 16GB Rom expanded strength of 32GB with a memory stick.

Rivo Phantom PZ15 Review shows that the PZ15 is an ultra slim and easy grip-able smartphone which has rounded edges at the sides from the back and blind edges at the sides from the front. Rivo Phantom PZ15 is 143mm High, 70mm wide and the breadth is just 6.8 mm which makes an amazement over the faces of viewers and they wonder to touch and check for. Rivo Phantom PZ15 is dual sim, sim-1 jacket is at the left side and sim-2 jacket is at the right side which is bigger than the left one and contains area for the memory card as well. Power button is at the right side below the sim-2 jacket and volume buttons at the exact opposite side of the power button to the left.

The display type of Rivo Phantom PZ15 is LTPS LCD capacitive touchscreen with 16M colors with up to 10 fingers multi-touch capacity and the size of its display is 5.0 inches with 720*1280 with 294 Pixel density.

PZ15 has dual cameras, the front of which is 5MP with face-detection and face beauty options with ton of others with (2880 * 1728) resolutions which are shown in the snapshots below. The rear camera is 13MP with smart features like Geo-tagging, touch focus, auto focus, face detection, smile detection, high density resolution  with LED flash support and the capturing capacity of up to (4160 * 3120) resolutions. Rivo Phantom PZ15 enables users to capture detailed video, sharp pictures & Recording.

Everything has been shown transparently and made crystal clear for the users, who had a wish of having a smartphone with good specs at low price. So the wait is over, go for it and have your Rivo Phantom PZ15 after you get all the readings and ratings from the Rivo Phantom PZ15 Review.

Rivo Phantom PZ15 is powered by an Octa-core processor with CPU Model (MTK MT6592) of Mali-450 MP Renderer with 32 bit as its type and the 1.7 GHz with 8 times speed (1.7 * 8) with frequency ranging from 728.0 ~ 1664.0 MHz makes Rivo Phantom PZ15 to jump into the chase for the best with bench marking applications like Antutu and Vellamo, being some of the best applications for bench marking.

Most of the smartphones have 1GB memory which was huge enough up til now for handling huge apps like Facebook, Skype and were a means to run games of the time with fluency but with the recent updates and extensions in the applications, graphics and user’s involvement, the need for having huge memory almost double the size became the need of the time. Rivo Phantom PZ15 Review updates you with the knowledge of having 2GB Ram in the PZ15 module for the customer’s ease and care.

Simply, greater the Memory, easy and fluent the performance.

Rivo PZ15 has an attractive interface with real deserved look. It contains built-in apps like Facebook, Skype, Twitter and others along with most used games like Candy Crush Saga and Subway Surfer. The keyboard and keypad for messages and dialing are used the typical and standard ones.

Another feature and change has been made in the gallery. By moving inside the gallery, the videos play in the background with no sound. So the user is helped to know, which video to play. The camera is also supported with a QR-Code reader facility.

The actual results and tendency towards a smartphone can be revealed after it is been bench marked with cool and good applications like the ones we have used for.

With an Octa-core processor and 2GB Ram (which are the core parts for the overall performance of any device), the results are very good and at some points, the Rivo Phantom PZ15 is at the top most category list at 3rd position. The performance can be viewed from the snaps below with Antutu.

Vellamo is a Qualcomm’s bench marking application that provides the best results with graph and provides best results after comparison. The Multicore , metal(single core) and the browser’s performances are shown in the snapshots below and shows very good marks for Rivo Phantom PZ15.

Now by comparing the results of Rivo Phantom PZ15 Review with LG NEXUS 5 and Samsung Galaxy S5, we get close or better results, consult the images below.

GPU Bench mark is an application for testing the graphics, smoothness and performance at the lowest and highest levels, when frames are to be passed over the Graphical Processing Unit. Rivo Phantom PZ15 scores 14,665 points over the bench which are relatively best on the Rivo’s part.