Price and Specifications of Samsung GALAXY A3 2016 in Pakistan:

Design and Display of Samsung GALAXY A3 2016:

Samsung Galaxy A3 (2016) has beautiful design and looks like a twin of Samsung Galaxy s6 in term of design, it has same shiny metal glass cover on back improves the beauty of smartphone and makes is more light in weight and handy. The dimension are said to be (134.5 x 65.2 x 7.3) mm as the thickness is just 7 mm which distinguish part of design. The Samsung Galaxy A3 (2016) has smooth round edges and hue is matte metallic. Smartphone will be available in four variant color Black, White, Gold, and Pink. The smartphone we had at lab for review was black. Samsung is not fond of putting extra weight on smartphone it usually use metal glass instead of metal which give glossy look and seems more stylish and alluring. 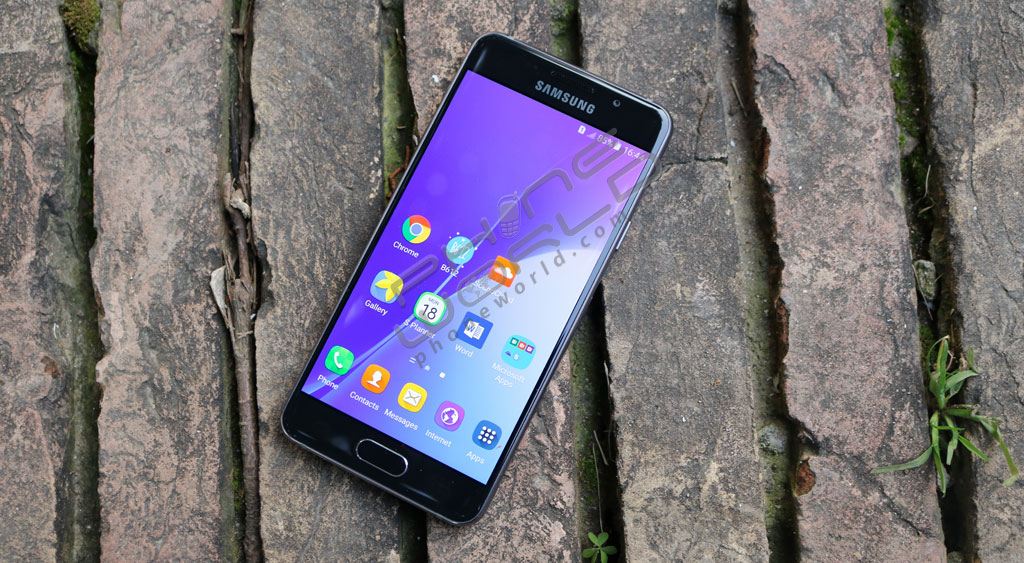 Samsung Galaxy A3 (2016) is supplied with 4.7” Super AMOLED display which is key feature of smartphone. In Pakistan the mid-level smartphone are usually launched with HD IPS display for the sake of keep the price low and affordable. While analyzing the smartphone we checked different aspects of display including dpi, multitouch etc. The display has (720 x 1280) pixels resolution with 320 dpi which enhances the viewing angle. Although the display is super AMOLED which itself has as such issue of view. The display of smartphone is suitable for HD video and ready to play every kind of game that can be run by processor with high graphic. Samsung has employed Coring Gorilla Glass 4 for protection of display which provide protection against dust and scratches up to some extent. The touch of screen is smooth and responsive as Samsung smartphones are famous for smooth touch interface. Over all it has awesome display with rich dpi reduces the viewing angles issues and you would smooth touch experience from responsive touch screen. The smartphone with Super AMOLED display in a price of Rs. 34,000 would be reasonable and affordable specially in Pakistan

Samsung Galaxy A3 (2016) has employed Samsung Exynos 7580 chipset with 1.5 GHz of clock speed. The processor has 4 active core although the chipset is octa core. Samsung put the rest of 4 cores in off mode because of price range of smartphone. The processor is capable of handling the 4G/ LTE and HSPA with speed of HSPA 42.2/5.76 Mbps and LTE Cat4 150/50 Mbps respectively. 13 MP camera is handled smartly by Samsung Exynos 7580 with support of 1080p video recording feature. In addition it support A-GPS, Glonass for finding the current location. The processor can execute 3,4  apps at same due to multitasking feature of Android Lollipop 5.1.

Here are listed some key feature of processor:

Samsung Galaxy A3 is shipped with efficient storage of 1.5 GB RAM which can easily carry 3, 4 apps in memory at a time and give smooth interface that user doesn’t feel lags while running multiple apps. While talking about internal storage Samsung Galaxy A3 is equipped 16 of ROM for storing data like videos and digital files. However the user is left with 11GB of space that can be used and almost 4 to 5GB space is used by smartphone for swapping.

Camera within Samsung GALAXY A3 2016:

Samsung carries elegant cameras on front and back. The rear camera has 13 MP sharp lens for capturing the image in low light with LED flash and 5 MP Selfie snapper on front. The camera give you access to gallery apps for checking the images you have captured with your camera. The cameras has shown good result. In settings option you have more choices for setting up the cameras according your occasion. The both cameras are technically very sounds and have good result with all its amazing feature. The smartphone in the price range of 20k to 25k are usually equipped with 13MP but their results are not as good as Samsung galaxy A3’s camera. 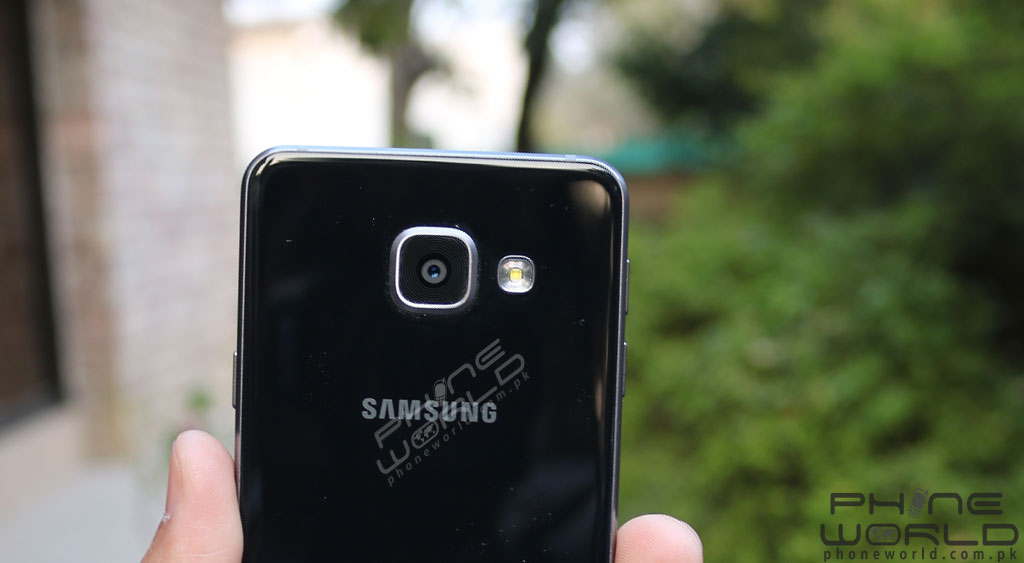 Samsung Galaxy A3 is having 13 MP rear camera coupled with LED flash. The actual resolution of rear camera is (4128 x 3096) pixels, however you can adjust the camera resolution from settings option. The camera has good result in low light with help of LED. There are several mode that has provided with camera which can be used to get better result. The modes are Pro, Panorama, Continuous shot, HDR (Rich tone), Night and Download. The stabilization of camera has been improved comparatively from previous version of Samsung Galaxy A3. Samsung Galaxy A3 supports FHD video recording of 1080px with 30fps and setting gives you two more option of HD and VGA video recording.

Samsung Galaxy A3 is stuffed with 5 MP Selfie camera on front side with improvement to previous version. The image resolution is measured (2576 x 1932) pixels with wide angle selfie support. The predefined mode are Selfie, Wide Selfie, Continuous shot, Night and Download. Front camera can also make video of 1080px with better result.

Network/ Connectivity of Samsung GALAXY A3 2016:

Samsung Galaxy A3 is 4G/ LTE enabled dual SIM smartphone and both support 4G/LTE bands and HSDPA, however you can use one at a time. The speed of HSPA is 42.2/5.76 Mbps and LTE cat 4 150/50 Mbps, but actual speed depends on network that you are using.

Battery Performance of Samsung GALAXY A3 2016:

Samsung Galaxy A3 is carrying 2300 fixed battery that provide power backup and keep the smartphone up for long time. The battery has pretty much good standby time. The battery can last for one day on average usage of 3G/4G calls and browsing. The only issue with battery is that it is fixed and non-removable so incase if the battery gets damage then you have to open the device so that warranty will be not claimed.

External Images of Samsung GALAXY A3 2016:

The external design and shape of smart is more elegant and thin and alluring than previous model of Samsung A3, it has less round edges than old model, and the thickness of new Samsung Galaxy A3 is just 7 mm which makes it more slim and smart. The smartphone is not carry to much metal over its body the Samsung is slowly and gradually switching to metal glass technology. It is good sign that Samsung has launched a mid-level smartphone with wonderful design and specs. The right side of Samsung galaxy A3 is carrying volume keys and left side has power key along with sim slot. The sim tray can hold two sim however if you use MicroSD card so you will have to compromised on one sim because there is only one place for used for sim2 and memory card. The powerful speaker along with Mic and MicroUSB port is housed at bottom edge.

Samsung has employed Gorilla glass 4 for protection of display as well as for back cover. The use of gorilla glass 4 on front and back makes it shiny and scratch proof. In hands Galaxy A3 is look alike Samsung Galaxy S6. The smartphone is perfectly handy the weight is less than 130 grams and dimensions are well managed which helps to easily carry in hands. The front side is packed with 4.7 inches AMOLED display with screen to body ratio is almost 67%. Unfortunately, like its model the Samsung galaxy a3 is not carrying Notification LED too.

The interface of Samsung Galaxy A3 is amazing and icons are beautifully shaped at interface. The apps icon will lead you to menu where all the installed apps are placed. When you swipe down on the interface, the notifications of apps are displayed there, the notification area has some quick settings options.

Antutu Benchmarking of Samsung GALAXY A3 2016:

while bench marking the Samsung galaxy A3 2016 with Antutu, The smartphone got 34943 points which is good enough for and mid level smartphone. The screen test confirmed that its supports 5 point multi touch that makes is suitable for any kind of games.

In Velllamo bench marking the smartphone has shown its class with impressive score card. Samsung Galaxy A3 2016 has succeeded to get 1386 point that proves the its can do multitasking smoothly. The single core performance is also fascinating with 992 points. The last test has carried to check the performance of browser which remained impressive with 2296 points.

GPU performance of Samsung GALAXY A3 2016:

Samsung Galaxy A3 2016 is shipped with powerful Mali T720 GPU with the frequency of 650 MHz and ideal GPU for mid level smartphone. Here to check the performance of GPU when applied some test which score card is shared with you. The performance of GPU is simply amazing and delightful. 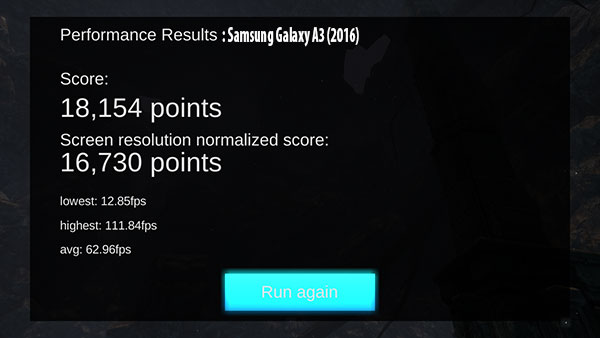 Conclusion for Samsung GALAXY A3 2016 Review:

Samsung Galaxy A3 2016 is an stylish, and good performer in term of speed, reliability and storage capacity. The smartphone with protection of Gorilla Glass on front and back, featuring Super AMOLED display and sufficient 1.5 GB and 16 GB of ROM is indeed a combination for Samsung lovers. the price of Samsung Galaxy A3 is Rs: 34,000 which is affordable and reasonable while you are getting the latest technology in hands.