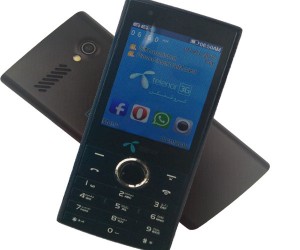 After the release of Ufone’s and Zong’s own brands, Telenor is also gonna jump in the competition by releasing the first ever featured phone with many smart features embedded inside. Although we don’t include featured phones in our reviews, yet Telenor Easy 3G Phone Review enforced me to make a review just because this feature phone is a device that contains all features that do other smartphones have. The Specs and features are discussed below.

The device also supports dual SIM, SIM-1 is network locked which means that only Telenor can be used either for 3G or for it’s simple use and no other SIM of any operator is going to work at this jacket. SIM-2 can be used for any network. Device also contains a torch light for dim or no light.

The device has been made smart with smart look along with smart price with a grip in the sole of smart hand and a wonderful logo of smart telenor with smart charger along with data cable like other smartphones with smart fm radio accompanied by smart headphones with all the dual cams and speakers each one at their own places with smart brain smartly. So the Telenor easy 3G should not be underestimated in smartness. That’s why, we can call Telenor Easy 3G Phone Review as smart review for a featured phone.

The key-pad for typing texts and crunching phone numbers with its user friendly key-pad and the nicely curved edges are not going to create discomfort to the soles and users may chat for hours and surf the internet with 3G, which sounds crazy though.

The internal interface for the Telenor Easy 3G Phone Review is very simple and user friendly. Nearly all the people using mobile phones are used to this type of interface. The Telenor easy 3G Featured Phone moves a step forward by adding many smart features discussed below:

Telenor Easy 3G Phone Review is on the mark that this featured phone with smart features is the king of all other featured phones. It is a set of choice for the people who don’t dare to jump in the line of smartphones neither they are too much literate that they would need just education for using 3G using smartphones. There are still many featured phones with price more than Rs: 3000/= and less smarter than this device. So all the above review proves that Telenor Easy 3G Featured Phone is an economical featured device that will connect you to your close ones using Skype, Whats-app and other social media with fast internet (3G) with very low amount.