Realme U1 is the company’s flagship about which there had been a lot of rumors for many days. Furthermore, a week before its launch, the device was spotted while being used by the company’s CEO Madhav Sheth. The phone went official earlier today. Realme U1 is the first Helio P70 Phone in the world. In addition to that, the Selfie Pro Realme U1 is a mid-range phone packed with some good specs.

The Realme U1 features a 6.3” IPS LCD panel with 1,080 x 2,340px resolution. According to the reports, the screen covers 90.8% of the front. It means that it is the whole screen phone with teardrop notch as that of Realme 2 Pro.  The bezel at the top measures 2.05mm. However,  the side bezels are just 1.7mm. In addition to this, the screen of the handset is guarded by 2.5D Gorilla Glass 3.  The back of the smartphone is made of acrylic with a special coating which makes it look like glass. So, the phone gives a very sleek and glassy look. Let’s have a look at it. 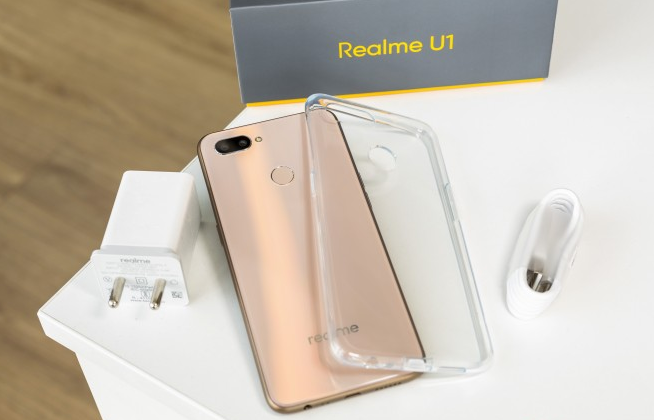 The most important feature of this newly-launched phone is that it is the first phone to use the new Helio P70 chipset which has faster image processing hardware. The Helio P70 chipset features four big Cortex-A73 cores (plus for A53), together with a Mali-G72 MP3 GPU. The P70 chipset will offer a good gaming experience as well. It will provide a steady 60fps in games. The 12nm Helio chipset also features a resource allocation system. It will keep a track on power usage and temperature.

The Realme U1 is powered by a 3,500mAh battery. The handset also supports standard 10W charging over micro USB. The phone features a dual rear camera setup of 13+2MP. Moreover, it features a selfie snapper of 25MP. However, the handset will not feature 4K video capture, not even 1080p/60fps. It will come in two configurations that are 3/32B and 4/64GB. The phone runs Color OS 5.2 based on Android 8.1 Oreo. The Realme U1 Color Options Include Ambitious Black, Brave Blue, and Fiery Gold.