Instagram is a Facebook owned online mobile photo-sharing, video sharing and social networking service. It let people to take videos and picture and share them either privately or publicly. Instagram, has over 500 million monthly active users and has been frequently updating the app with new features.

Recently Instagram released an update that is very terrifying for users. The rumor is moving around on social media that Instagram secretly added a feature that will send people a notification if you screenshot their disappearing photos.

Will Instagram Notify your Friend when you Screenshot their DMs

Good news for Instagram stalker….This tall tale is totally not happening. Instagram did launched a new feature that will notify you if people screenshot your direct messages. Direct messages are those photos and video messages that will disappear after you have seen then just like Snapchat.

Instagram did start letting you know if people screenshot your Snapchat-style direct messages (those photo and video messages that vanish after you’ve seen them.)

Right now ‘NO’ feature is introduced that can send notification to your crush when you screenshot their latest normal photo to send to your best buddy in a group.

This confusion was due to people’s utter misunderstanding who saw notifications that someone has screen shotted their messages and assuming it was a photo.

Swipe right into the camera to take a photo or video, then tap the arrow to send it privately. You can choose a group or create one in just a few taps — and you can also send to individual friends at the same time. Send anything you want, from inside jokes to your worst selfies. Unlike other messages in Direct, these photos and videos disappear from your friends’ inboxes after they have seen them. And you’ll see if they replayed it or took a screenshot. 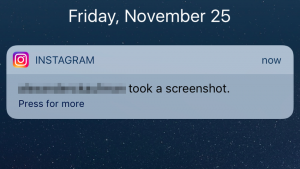 These are just false stories. The tweet above is selected over 20,000 re-tweets. The actual problem was due to Instagram’s unclear notification. It doesn’t explain what the screenshot was of, just that a screenshot was taken. Instagram did not immediately respond to a request for comment.

Instagram has also introduced a new Live video feature to the app. To make a live video, a user needs to swipe right from their feed and tap on the “Start Live Video” button. Users can share a live video for up to an hour, and can pin a comment on it.