Nowadays the use of smartphones has increased to the great extent. We can see people around us with their smartphone in their hands 24 hours a day. People keep it in their pocket when they are moving around or hold it in their hands all the time. We understand it as now it’s not possible for most people to spend a minute without smartphone. They want to be in touch with their beloved ones via phones or they keep it with themselves all the time for business purposes. Moreover, they keep it on their bedside table when they go to sleep. With this level of usage, they keep on ignoring that they might be at risk of damaging themselves in the long run. All the smartphones emit harmful radiation but some phones emit the most radiations.

There are some phones available in market that emit the most radiation when held to the ear while calling.

Do You Know that these Phones Emit the Most Radiation 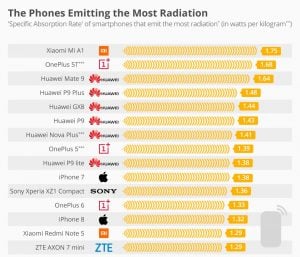 The German Federal Office for Radiation Protection (Bundesamt für Strahlenschutz) has a released a comprehensive database of smartphones and the level of radiation they emit. The current smartphone creating the highest level of radiation is from Chinese vendor, Xiaomi Mi A1. More interestingly, the top list is dominated by smartphones from Chinese vendors that include phones of Xiaomi, OnePlus, Huawei and ZTE.

However, the premium Apple phones are also included in the list. The iPhone 7 and iPhone 8 are also here to be seen.

Read Next: Here are the mid-range Smartphones with Headphone Jack You Can Buy Right Now