AnTuTu ranking consists of smartphones that have at least 1,000 units running the benchmark. Then the average of the scores of all handsets running the latest V7 version of the software is taken. 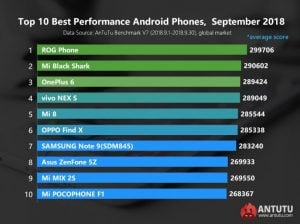 It is quite obvious from the report that Asus’ ROG Phone has taken first place in the list. It is mostly due to its overclocked CPU on the Snapdragon 845. However, the phone runs the four big cores at 2.8 GHz but its clock speed goes up to 2.96 GHz. This is the actual reason behind its best performance.
The Xiaomi Black Shark has taken the second place in the list. The Xiaomi Black Shark Gaming Phone has many high-end features including Snapdragon 845 and liquid cooling system. So, these might be the reasons behind its good performance.
Then comes the OnePlus 6 taking the third position. It is quite near to Black Shark in points. The OnePlus 6 is also powered by Snapdragon 845. Moreover, the software optimization might have played an important role in its better performance.
The list further includes the Vivo NEX S, Xiaomi Mi 8, Oppo Find X, Samsung Galaxy Note 9, Asus Zenfone 5z, Xiaomi Mi Mix 2S, and the Pocophone F1 which is the cheapest Snapdragon 845 powered phone.
It is clear that the list shown above is dominated by Snapdragon 845-powered smartphones. However, this trend is expected to change in the coming months due to Huawei’s Kirin 980 SoC that is powering the latest Huawei phones.

Why are the Apple Headphones White?