With increased mobile usage, mobile advertising continues to make up a bigger share of Facebook’s revenue pie. Mobile ads accounted for 62 percent of the company’s $2.7 billion in ad revenue for the quarter, up from a 59 percent share in the previous quarter and a 41 percent share during the same period last year. It’s a stark turnaround from Facebook’s early days as a public company, when the social network’s stock tanked on fears that it couldn’t convert its growing desktop business to mobile. 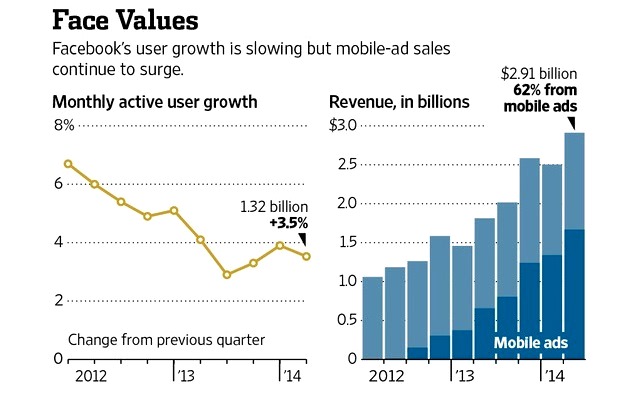 The company’s shares, which touched a high of $76.74, were up 7% at $76.31 by midday on the Nasdaq. At that price, Facebook’s market value is just short of $200 billion, putting the company in a position to overtake IBM Corp as the fourth-largest US-listed tech company.

The top three are Apple Inc, Google Inc and Microsoft Corp. At least 28 brokerages raised their price targets on the stock, by as much as $15 to a high of $100.