This prestigious launch event was held on 28th August 2017 at local Hotel in Lahore and was attended by Fakhar Zaman, the cricket star along with numerous famous celebrities and Samsung dealers.

Here is the TVC of Galaxy J7 Core:

Samsung featured Fakhar Zaman in Galaxy J7 Core in which Zaman told his story. In the advert he revealed that he was not a good student but he knew that he was special. Cricket was his passion and finally he excelled in this field.

Fakhar was gifted specially designed shirt from Samsung on the launch event of Galaxy J7 Core. Here are some pictures from the event. 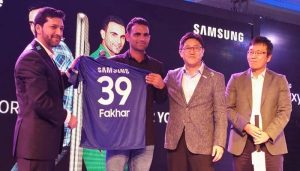 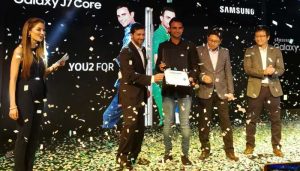 Samsung is a truly global award-winning innovator in telecommunications, electronics and convergence technologies. Samsung is also playing a key role in strengthening the digital infrastructure and creating a sophisticated cellular eco-system in Pakistan.