While the tech giants like Huawei and Samsung have already launched their foldable lineup, and are working on their better version, Oppo has shown us a glimpse of its first foldable phone named Find N. While the company is working on it for the last four years we can assume that Oppo first foldable phone will be an utter success since more R&D is carried on.

The company has released an image of this device giving us an overview of it from the spine side. From that, we can extract little details of the phone primarily the triple camera setup which is placed in a vertical layout inspired by Samsung Galaxy Z Fold 3. While the overall detailing of camera setups looks amazing we also see a tagline in the teaser which is read as: “A small enough, big enough folding-screen phone.” Now this tagline is quite confusing and what it actually means is more confusing but we will get to know about it with time. Till then let’s see the teaser: 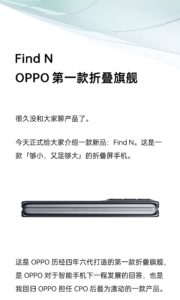 Right now we have just got a glimpse of the device with no other details, the full unveiling of the device will be done on December 15. So just wait and watch whether it will steal the show or not.