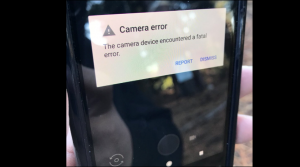 Besides the outstanding cameras, many people are still facing the camera crashing problem in Google Pixel Phones that is a matter of shame for the company. So, after getting a lot of complaints and feedbacks Google is working on a fix for this camera problem. On the 8th of July, one of the twitter users tweeted at Google to let the company know that she tried her best to sort out this problem but nothing seems to be working. In reply to her tweet, Google confirmed that it is aware of the issue and the team is looking into a solution. 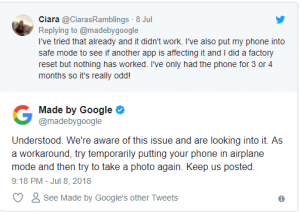 According to some previous reports, we came to know that Google was about to replace all those Google pixel phones who were facing camera problem. Now it seems like the company has narrowed it down to a software issue instead of a hardware one. So, Google is hoping to fix this issue via an update.

So, there is a good news for all Google pixel 2 users that their phone’s camera bug is going to be fixed. You people will have to only wait for the launch of Google’s official fix.

Also Read: Mid-Range Google Pixel to Launch in May 2019