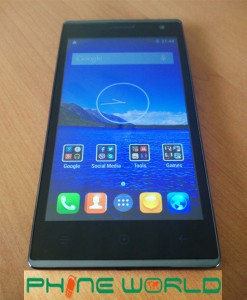 Its been a fun to the interested ones who have eyes wide open in the smartphone’s market. One company launches better phone in relation and the processes reverts when the runner up company releases even better to grab its position in the market place soon after it is been pushed back. This may not make sense to many, yet in the field of smartphones, it matters a lot to me, the operators, the customers and to the companies launching smarter than the smart. Haier G30 Review  is about the shape, size, performance, bench-marking, cons, pros, battery, functions, price and at the end a technical review that makes the customers satisfied with what they need and what exactly have they been looking for.

The images below shows clearly like the Chinese idiom that “You can get a thousand words out of an image that you couldn’t extract from words at all”. The device has a soft touch with wonderful finishing and attractive look that is felt comfortable to hands once grabbed.

A low-end smartphone with the latest version of Android Operating System surely is an achievement. This will help that category of people who wants to have a smartphone with little budget. Haier G30 Review is of the view that the device is a budgeted smartphone with better specs and wonderful display. The rest of the interfaces are nearly the same as do the typical Android smartphones have. Camera has been loaded with the general functions needed for a typical camera.

The layouts been used for messages and dial pad been used for dialing numbers are the generic ones and are beautified with blue color in its customization. Smart curves and gesture intelligence has been fed in the keyboards and one need not to put his/her finger away. He needs just to swap his/her finger to the next alphabet and the relative word will automatically generate.

In our review, a lot of attention is being made in the bench-marking. Which is just a technique that can find the actual position and performance of a smartphone. In the Haier G30 Review we came to the point that the device is among the very few low end devices that allow you to bench-mark it with the highly loaded applications that are not even strong enough to hold the bench-marking applications and they just fail.

A low-end smartphone with the support of being bench-marked with a heavy application like Antutu is its beauty. Haier G30 took 11410 points on the board with its 1.3GHz dual MTK processor and just 512 MB Ram which is satisfactory and mandatory to mention that others smartphone usually can’t do like this. With Antutu we can check the multi-couch capacity as well. Haier G30 can support up to 2 fingers consecutively.

The below mentioned performance in the snapshots of browser, single core and multi-core processor with just 512MB Ram and a dual core processor for Haier G30 are good points.

In relation to the processor and Ram, the GPU (Graphical Processing Unit) is functioning even better by scoring over 8thousands on the board by a GPU Testing application.

Some people don’t believe in your words until and unless you show them in the snapshots, the actual performance of a smartphone. Being checked with Fast Racing 3D and Subway surfers the Haier G30 performed smoothly and without breaking in the play mode.

Haier G30 Review shows that the device is a low end smartphone with relatively better specifications and as it has been built with the latest technology just because of its manufacture in the recent days, Haier G30 is sent here with the latest version of Android with kitkat as its OS and shape even better than many smartphones with high price and low attraction.