An upcoming Oppo Realme 2 image went live on the website of company ahead of official announcement. The image shows front and the back of Realme 2.

However, there are no any more details about the device on the website but we can see only the image on the homepage along with the tagline “A notch above”. 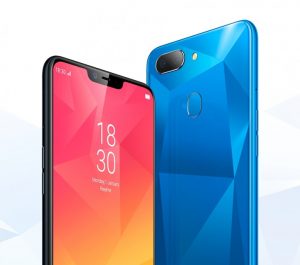 The image surfaced online, shows that the Realme 2 also has a geometric pattern underneath the glass back. From the image we are expecting the phone in two color variants after the launch, as we can see them in black and a blue in image.

The Realme 2 looks similar to many of Oppo phones, such as the Oppo F7 and the recent F9. From the resemblance in design, it is to be expected that the Realme 2 may also have the same MT6771 Helio P60 processor as these phones, although we can also expect a 6.23-inch 2280×1080 display and 16+2MP rear camera in Oppo Realme 2.

Read Next: OPPO F9 Launches with a tiny Notch and 90.8% StB ratio