You must be thinking that today we are gonna tell you about the foldable smartphone of any big player in the mobile industry. Well, not at all. The smartphone is not made by LG or Samsung but produced by a small California-based company known as Royole FlexPai.
This California-based company has claimed that their product is world’s first commercial foldable smartphone. However, as we have observed in the video that it more looks like a tablet. The screen measures 7.8-inches when unfolded, and when folded the screen measures just 4-inches.

Video of First Foldable Smartphone Reveals Display of a 7.8-inch

Royole, itself has produced the display of the device and it is of an AMOLED nature. The device has paired with Android 9 Pie with company’s own UI, dubbed Water OS, on top. 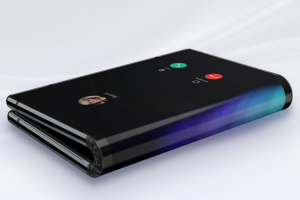 The company main focus is on the display but we also can’t ignore the specs of the phone as they are also very impressive.  This device utilizes the next-generation Snapdragon 8150 that is yet to be officially unveiled by Qualcomm.
The processor of the smartphone is paired with 6GB of RAM and 128GB of storage which is expandable via microSDs of up to 256GB. There is also a version of 8GB of RAM and either 256GB or 515GB of internal storage available for those who are willing to get more space.
The camera section has a main 16-megapixel sensor alongside a secondary a 20-megapixel sensor that sports a telephoto lens. It can also be used as a selfie camera when folded and when unfolded, it can be used as a rear camera.
The device comes with a USB Type-C port but it lacks a 3.5mm headphone jack, The powerhouse of the handset is fueled by a 3,800mAh battery. The battery can be charged with the Ro-Charge fast charger. The handset charge in just 30 minutes from 0% to 80%.
Zainab SaeedLast Updated: Nov 1, 2018
Share
Facebook Twitter Pinterest