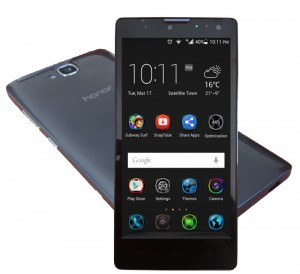 Huawei Honor 3C (One of my choices) has launched a package with 2GB Ram, 8GB Rom and Quad-core processor with a long battery that runs for long time with (139.5 x 71.4 x 9.2) mm as its dimensions and 8MP rear camera and 5MP front camera with good and rigid look that looks cool and shiny. Comes in grey and white colors with relevant themes to set upon, so its upon you weather you want to have it perfectly white or select the black one.

So what’s left from the users side ? Nothing right. Just go and grab your Huawei honor 3C and enjoy the graphics oriented games and link with the social media and with the entertainment apps all at once with the pond of memory, Huawei honor 3C gives you over its 5″ IPS LCD capacitive touchscreen with 16M colors.

As the device looks pretty and attractive over the table, so does it looks dashing in the sole of your hand, when you holds it.

The OS of Huawei honor 3C is launched with Android version 4.2 jelly bean. And the choice is yours to select a theme of your choice from the repository or download it from the internet pool.

The settings contains three main features while keeping the rest of them as the same which are :

The Keyboard and Keypads for dialing and sending text messages have been the typical and standard ones with slight modifications you can see in the images below.

The device has been sent in two different Home Screen styles. One is for the people with having interest in smartphones and the other is for people with little or no knowledge and is grabbing a smartphone like Huawei Honor 3C. The one selected in the snapshots below shows the direct approach and simplicity towards selecting a simple screen.

Checking a device with three important bench marking applications that checks each and every angle of the device is the key reason for selecting a smartphone. The apps are discussed below.

Huawei honor 3C has a Quad-core processor assembled with 2GB Ram that has perfect combination being set in the module of honor 3C board with 8GB Rom that performs smoothly and with best performance, that’s why Huawei honor 3C Review is up to the mark that the device has scored best and performed best and has better stability as shown in the snap below.

The Qualcomm’s own application is being selected to run for the performance of single processing, multi-processing as well as browser’s ability and smoothness for honor 3C. The results are great to its level and the device is performing better as compared to a standard Samsung Galaxy S3 when compared to it.

Checking Huawei honor 3C with a heavy graphical game to check for the frames, quality and flow, we revealed that Huawei honor 3C was at its level best while playing Contract Killer Sniper. And one can be fully entertained with the smooth operations of the above mentioned game. Consult the graphics below.