So finally the wait is over, Huawei has unwrapped its flagship smartphone Huawei P9. With the launch of Huawei P9, now Huawei is ready to compete with the present giants in Market. Although Huawei has been in market since its launch of Mate 8 a couple month ago, but P-series addicts were waiting impatiently for P9.

Huawei has made some incredible changes in camera section and the design has also been improved. P9 has opened a new ways of real photography with perfect night mode and selfie is now more sophisticated and wider than previous P8.

Huawei P9 has 5.2” NEO-IPS display the same as P8 had. The screen resolution is still 1080px, it may be because of battery friendly nature; as lesser pixels results in more battery timing. Huawei P9 will be available in two variant, 3GB RAM with 32 GB ROM and 4 GB RAM with 64 GB ROM. That shows Huawei is targeting both high-end and mid-range market, which is quit challenging for other giants to tackle. Now it’s time to dig more information about Huawei P9.

Huawei P9 comes in decent white color retail box. The box has Huawei Logo in middle of the box while the Leica logo can also be seen on the box. The box includes almost every essential stuff like USB Type-C cable, Headphones, complementary cover and 2.0A travel charger. The charger is fast enough to charge the smartphone quickly however it doesn’t support fast charging technology.

Price and Specifications of Huawei P9:

Design and Display of Huawei P9:

Huawei P9 employed 5.2” IPS-NEO display with 1080 x 1920 pixels resolutions and 480 dpi. The screen is fine and fitted in a compact body frames making it suitable for pocket. Don’t know why Huawei is constantly using the same screen technology and resolution for its high ends smartphone, the tiny bezel around can be seen which is almost negligible that indicate the Huawei has worked precisely in designing phase to produce a flagship device. 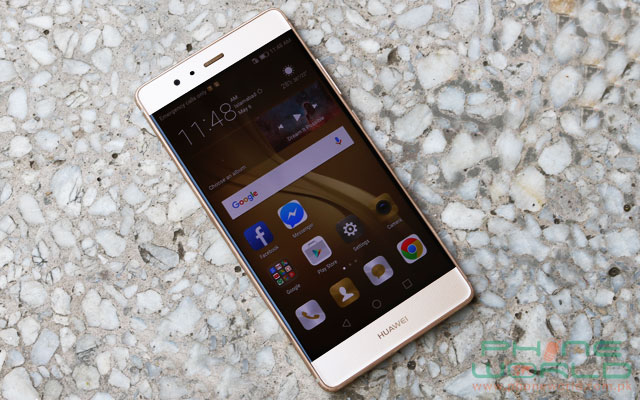 It seems the company is much satisfied with its decision, however the others brands like Samsung are a step ahead with AMOLED screen technology. It’s a bit surprising for us that Huawei hasn’t deployed QHD screens yet. The IPS-NEO is also better screen technology, here we are just comparing the technologies, so in this ways IPS is bit older than AMOLED.

The black color looks more prominent is Huawei’s devices, but we have to admit, that looks just awesome and makes the screen accent more stylish and graceful.

Design and Display of Huawei P9:

The front has 5.2” IPS-NEO LCD with 2.5D Gorilla Glass 4 protections. The area above the LCD has some essential stuff like earpiece at the middle and fixed Notification LED which can be seen only is active mode. The left of earpiece has front 8MP selfie shooter and couple of necessary sensors. The bottom has nothing to explain but radiant Huawei logo at center.

At the back, a Dual camera designed by LEICA and dual LEDs and sensors are the major additions. All of these are placed at plastic strip which is designed to cover the antenna bands. The finger print sensor is fixed at upper middle placed in a square shape cutout. The uni-body structure doesn’t give you access to battery,

The right edge is home to volume rocker and power button, the power button is fixed in dimple with patterned surface. Both buttons are at suitable distance and responsive. The opposite side has SIM/SD tray.

Likewise, the extra mic for noise cancellation is housed on top, now go right down to bottom, it carries 3.5mm Audio jack, Type-C 1.0 USB port, grill for loudspeaker and obviously Mic, too.The chamfered edge add more elegance to Huawei P9 lite. The corners are round and which makes it more feasible smartphone for pocket.

Huawei P9 is shipped with two variants, the one  is available with 3 GB RAM and 32 GB ROM while the second variant is packed with 4GB ROM coupled with 64 GB ROM. Additionally, it does has MicroSD card support upto 128 GB. The memory section has nothing to point out, it would have better if 4GB RAM version were available with 32GB ROM on board. That would a cast effective for those who loves more speed than extra internal space.

Finally, we are at point that pride of Huawei P9. It promises to give next level photography experience. Huawei has something in form of Dual camera which is co-developed by well-Known optic company names LEICA. Although it could have been a risky move for Huawei but Huawei has somehow managed it nicely.yet it has some issue while using camera module; it gets heat up that might me cause of handling two cameras simultaneously by the processor.

Well, we have to admit Huawei has kept its word to deliver the cutting edge photography experience to user. Now enjoy fastest focusing camera with improved night photography and last but not least the black & white 12MP sensor called monochrome, the outclass colorless photo shoot ability which gives the crystal clear picture quality without losing information.

Huawei P9 come with 12MP Dual camera, the one is standard camera –capture color photos however the additional camera captures colorless photographs (monochrome) or black & white. The cameras have three shooting modes that are Standard, Vivid color and Smooth. Three modes capture photos with different combination of colors and light.

The above mentioned shooting modes are available for only color sensors, the standard captures the real natural picture, while the Vivid makes the color saturation a bit high and smooth keep the object soft with gentle colors.

The monochrome sensor is designed to capture more light and much clearer photo with more information. This also results perfect photography in darker area. The clearer result of monochrome is because of no RGB filter, it allows the camera to pass more light.

Interestingly, the camera has an awesome feature among the many, it allows you to take image just like DSLR camera, and it blurs the background and let the focused object stand out the picture. The sensor use hybrid autofocus which also backed by laser autofocus, so the camera focuses the object precisely and blurs the background. This kind of photography is also known as bokeh photography.

Huawei P9 carries 8MP front selfie shooter with resolution of 3264 x 2448 pixel with native ratio of  4:3. The camera has excellent result and well responsive. The wide angle selfie is now more sophisticated. the has bunch of mode that allow you to play with camera, the modes are Photo, Beauty, Panorama, Video, Beauty Video, Time_Lapse, WaterMark, Audio Note. There are several effects available by default in camera Application and easy to use. the camera can make 1080p video, too. The captured images are shared below.

We have dual SIM variant for review, sim tray has space for nano-SIMs, the portion for secondary SIM is hybrid as is can also accommodate MicroSD card.

Huawei P9 support Dual band Wifi 802.11 a/b/g/ac, wifi direct, hotspot, Bluetooth 4.2 and NFC. In addition it has GPS, GLONASS and Beidou, yet it lacks FM radio chip on board.

While talking about physical connectivity, it has 3.5 mm audio jack and USB Type-C for charging and data transferring. By default it only charges the smartphone for security reason, so you have to manually select from smartphone in case you want to transfer data.

Huawei P9 is packed with 3000mAh battery, which is precisely placed inside the compact body frame and its non-removable fixed battery. surprisingly Huawei P9 does not supports fast charging however it come with 2.0A charger out the box that promises to charge your mobile quickly in 30 minutes from flat to 40%.

We have put the battery on test to check the performance. The battery dropped 10% in hour with optimal processing speed. Other brands like Samsung that use QHD AMOLED screen comparatively suck more battery than FHD IPS. That might be the reason why Huawei always goes with 1080p FHD screen.

The standby timing of P9 is outclass. It just dropped 1% in 24 hours. With 3G and 4G services like video calling, internet surfing, streaming can be used for almost 15 to 16 hours.

Huawei P9 has Android Marshmallow 6.0 and using its own Emotion UI EMUI 4.1.The home screen has multiple icons and widgets, lock screen gives you access to camera and digital clocks.  Every time you wake up the smartphone the lock screen welcomes you with new wallpaper which is randomly picked from wallpapers section, you can set a wallpaper for lock screen. if using fingerprint sensor to unlock the screen then you will be directly land into homescreen.

Every application you install will appear on Home screen since there is no drawer for applications. There is an interesting feature calls Simple Home screen Mode, which can used while driving, it only allows calls, SMS and some others simple function and closes other connectivity.

The notifications area has customized interface with two columns, the right columns show the timeline and right has obviously the notification from an App. The Quick shortcuts can also be accessed by swiping down.

Huawei P9 is powered with its own processor Krin 955, the latest in the Krin series and a flagship SOC from Huawei. The chipset is octa-core, four cores are cortex-A72 with clock speed of 2.5 GHz and other four cores are Cortex-A53 with the frequency of 1.8GHz. The GPU is Quad core Mali-T880 MP4.

Huawei P9 gets heat up while using the camera module that might be the issue of handling dual cameras. That was the reason that we were afraid of, the dual camera adventure could a risky move for Huawei. Still it’s not a big issue that effects the smartphones’s performance.

Huawei introduces its Krin 955 chipset, which is embedded inside another flagship from Huawei. The Antutu benchmarking of Huawei P9 shows good result and managed to get 93639 points but being flag ship device, we were expecting more from P9 for. The Samsung Galaxy S7 with100029 point is ahead from Huawei in Antutu benchmarking.

The flagship device has shown its caliber in vellamo testing. It got 3595 points in Multicore test. All thanks to 2.5GHz clock speed that encourage the Huawei P9 to rule over the table with highest points in multicore test.

In the Metal test (single core test), Huawei P9 got 2845 points and is only points behind Samsung Galaxy S7.

In the browser test, Huawei P9 beat the Samsung with few points. No doubt the Huawei P9 has fastest loading ability. The executions of JavaScript, JQuery is quite fast

Being a flagship device, Huawei has almost everything to compete with other giants like Samsung Galaxy S7. In term of specs and amazing photography experience. Yet it has lacks fast charging, gets heat up while using camera dual camera. Processor still needs some improvements to overtake the competition. Dual camera feature gives more boost to Huawei P9 with larger aperture and low-light photography is now more clear and attractive. And most importantly it’s available at very affordable price in market as compare to other flagships devices.