After the launch of 3G and 4G services in 2014, Pakistan has witnessed unprecedented growth. According to the recent report of PTA the number of 3G/4G subscribers in Pakistan reached 37.57 million at the end of 2016. The stats indicates that Pakistan successfully increased its 3G/4G subscribers from 29 million to 37 million in 2015-2016. Pakistan is One of the Asia’s Fastest Internet Growing Markets: Survey.

Now almost over one million people come online every month in Pakistan. Most of them use their phones for this purpose. The stats simply narrates the success story of efforts of Pakistani mobile operator’s regarding digital Pakistan initiatives and providing best ecosystem in the country.

Pakistan is One of the Asia’s Fastest Internet Growing Markets: Survey

At present overall number of internet users in the South Asian country stands at 35.1 million. That represents 18% of the 194 million population. This indicates that a larger divide still remains offline. Its possible that will be connected as soon as the broadband coverage extends across the country.

The GSMA Intelligence stats in May, 2016 indicated that the rate of Mobile Broadband (MBB) penetration of Pakistan has witnessed phenomenal growth specially if compared to other regional countries like Bangladesh, India and Indonesia.

Also Read: Pakistan is the World’s Most Affordable Country in ICT and Telecom Sector: WEF

As far as population density is concerned, Pakistan is the fourth-largest country in Asia. 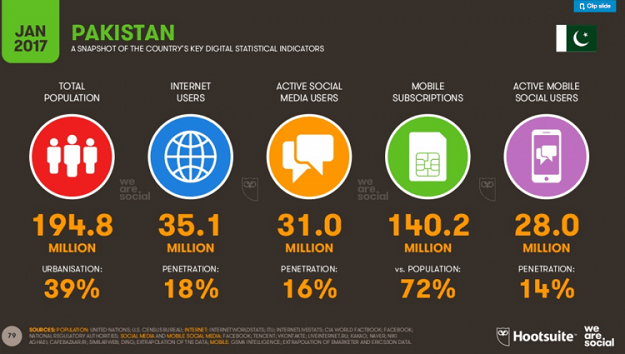 According to digital marketing agencies, Hootsuite and We Are Social, internet users in Pakistan increased by 20% in 2016. Active social media users also multiplied really fast, registering growth of 35% year-on-year. Worldwide average also stood at 10% for internet subscribers and 21% for social media profiles.

In Pakistan almost 70% of the Population uses Internet via Mobile 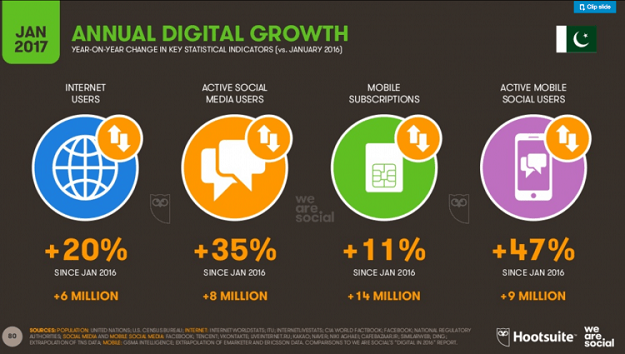 Just like any other developing market, the majority of web traffic is via mobile in Pakistan as well. Latest stats indicates that mobile phones make 70% of the overall action. It has increased by 13% from last year. The share of PCs were recorded at 27% after declining by 22% since 2015. 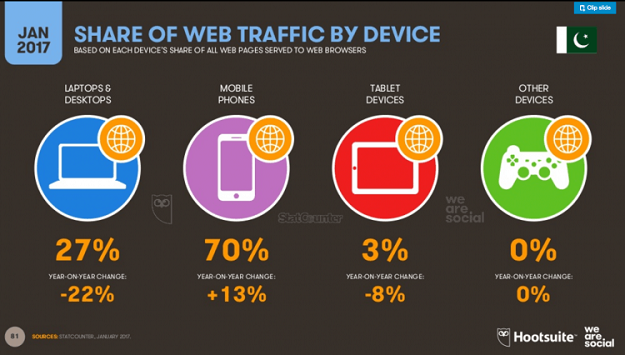 No doubt Pakistan has improved a lot in last few years due to the unprecedented efforts of both MoITT and PTA. International platforms like GSMA Intelligence, ITU etc. are also praising country’s efforts and commitment towards this cause. With such efforts and improved network coverage; Pakistan will embark on the new era of digitization.