The Legion Phone Duel 2 released by Lenovo on 8th April 2021, a predecessor of the Legion Duel that launched last year. The company has added all the key characteristics in the gaming device. The handset features dual recharge ports, two dual temperature control fans, two linear Haptical motors, and two pairs of ultrasonic shoulder triggers. The device will be available officially on the market for purchase very soon.

A glass island at the back of the latest game-centered, Lenovo phone glass breaks the back case into two parts. Dual rear cameras, cooling fans, and the RGB Legion logo are available on the back of the device. 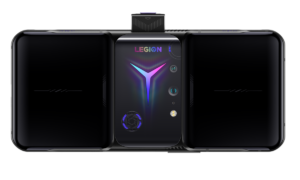 On the front, a 6.92 inch AMOLED panel equipped with a resolution of 1080 x 2460 pixels, a 144Hz refresh rate, a maximum luminosity of 1300 nits, and HDR10+ support. In addition, the display packs symmetrical bezels, given the horizontal pop-up style of the selfie camera.

The device contains two force touchpoints, two pairs of ultrasonic shoulder triggers on the side frame, and a couple of capacitive keys on the back of the device. The Snapdragon 888 provided on the power side with 12 GB, 16 GB, 18 GB of RAM with storage of 256 GB or 512 GB in the Lenovo Legion Duel 2. Lenovo’s ZUI 12.5 based on Android 11 covers the software side.

As reported, a range of game-centric features is provided on the device. It is fitted with dual cooling fans that operate together to keep the inner temperature under control. The bottom one takes the hot air and passed by the copper heat sink while the top fan works as an exhaust. In comparison with the first Legion Phone, Lenovo is improving thermal efficiency by 30 percent. 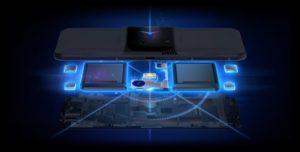 The unit is packed with a strong battery of 5500 mAh, divided into two batteries, 2750 mAh. Two charging ports support the device, with a 65w charge speed by each port, while an optional adapter bumps the total speed to 90W with a charge of 100% in 30 minutes.

Lenovo has a protected cover if you are concerned about the heat. The device is supplied with the Lenovo battery protection system, which controls the heat, charge rates, and battery preservation for efficient power delivery.

You may be also interested in: Lenovo Legion 2 Pro to Have Side pop-up 44MP Selfie Camera