After the rumours, now finally, the first official image of the new Nokia 8000 4G has surfaced online along with additional details of design and specs. Before moving to the specs details, let me make you a bit disappointed. There is no slide-out keypad cover (a trademark of the original 8000-series).

Well, design-wise, it looks more like an ordinary feature phone but with some premium touches. The phone’s sides and the keyboard are curved while the exterior is coming with a “glass-like” design or we can say with a glossy look. 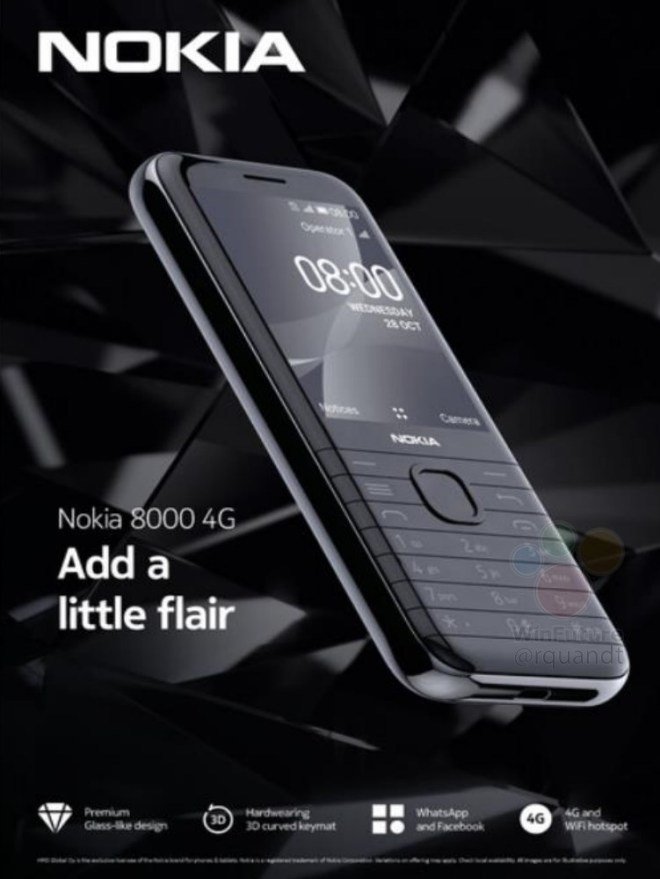 The 8000 4G is running a KaiOS device, with WhatsApp and Facebook apps. Users will be able to share the 4G connection with other devices through a Wi-Fi hotspot just like smartphones. The phone has a dual-SIM version-using two nano-SIMs.

The German source-winfuture says, “HMD has given the Nokia 8000 4G the modern operating system for feature phones, which is used on the 2.8-inch LCD with a QVGA resolution of 320×240 pixels. Inside the device is a Qualcomm Snapdragon 210 quad-core SoC, which was previously used in smartphones and is combined here with 512 megabytes of RAM and four gigabytes of internal flash memory. The memory can be expanded by up to 128 GB using a microSD card.”

The powerhouse of the phone is backed by 1,500 mAh battery. The phone’s battery is replaceable and will charge over an outdated microUSB port. Well, the camera section brings a disappointing 2 MP camera.

The device weighs 110 grams. Besides the Nokia 8000, HMD Global also wants to introduce the Nokia 6300 4G to the market, there are no specific information or images yet. According to previous rumours, Nokia 6300 4G will have a smaller 2.4” screen.

Recommended Reading: Nokia C1 Plus Specs Leaked Ahead of Launch