The Nothing phone 1 is one of the highly anticipated smartphones that was launched with pretty good features. The company had teased its handset for a long time due to which it got more and more famous. There is no doubt that Nothing One is a very good phone with promising features and it turned out to be a pretty good debut. The question that arises here is that we have seen a steady stream of updates for the handset, but when will Phone 1 receive Android 13? Carl Pei has recently issued a rather pointless response to a Twitter user who asked this very question.

When Will Nothing Phone 1 Get Android 13?? 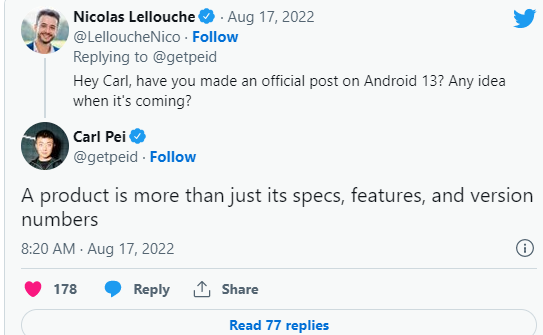 It is quite obvious that saying that a product is “more than just its specs, features, and version numbers” didn’t answer that question at all. The highly anticipated smartphone, Nothing’s Phone is currently undergoing a rocky update situation. It is worth mentioning here that almost less than a month has passed since its launch, the Phone (1) already has three OTA updates that added some features and fixed some bugs with the device.

Why It Seems Disappointing that Android 13 Is Coming To Nothing Next Year?

The Phone 1 is sporting a stock-like avatar of Android 12 but it will still not be getting Android 13 anytime soon, not even for the next four months. It isn’t the first pothole that the company has faced since the launch of the Phone, others include multiple software bugs, build quality issues, and an incorrect listing of the phone’s specs like peak brightness levels. So, it is disappointing for users who have put their money and bought Nothing’s first phone.