Google Voice App For iOS recently got a new feature that lets the users hide the caller ID for outgoing calls permanently. This new feature will soon make its way to the Android Users as well.

The new setting allows the iOS users to hide their caller ID permanently for the outgoing calls. However, the option to hide your caller ID while making calls with Google Voice was already possible. The *67 prefix before each number you dial made it temporarily possible for you to hide your identity. Google has solved the problem for its users by giving a permanent way of hiding the Caller ID.  All the Web Versions and Android Ones will also get this toggle soon. 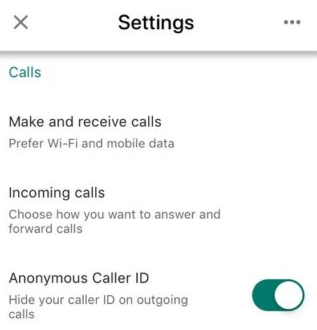 In addition to that, last month, Google Voice App got updated with a new UI. The latest update brought a new look to the App.  More whitespace was added to the user interface of the App with this update. In addition to that, the top app bar also got redesigned with a new search box. Furthermore, the new search box got unified for both messages as well as contacts. On the other hand, the bottom tab bar got some redesigned icons. The update brought many interesting changes showing the names under the active tab.
Google keeps on updating its Apps to engage its users. It always tries to make things more user-friendly. So, let’s see which will be Google’s next App that will receive a new update with some amazing cool features.
Laiba MohsinLast Updated: Feb 15, 2019
Share
Facebook Twitter Pinterest