OnePlus is getting ready to unveil its second flagship device soon but WinFuture has published leaked images of OnePlus 6T today. In leaked images, the phone appears with glossy and matte black finishes. The OnePlus 6T has a tiny notch, really just dropping down to wrap around the front-facing camera.

The design almost looks identical to an Oppo phone that has launched in August. 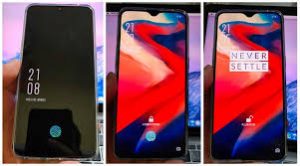 We don’t know much details about the device but we know that handset will have a Snapdragon 845 and at least 6GB of RAM, like the OnePlus 6. Moreover, we came to know about some changes in OnePlus 6T that are also confirmed by the company, that is like the phone won’t have a headphone jack, which is no doubt a bad news. Well, the good news is that the device might have a bigger battery. OnePlus has also confirmed that the phone will feature an in-display fingerprint sensor.

OnePlus 6T launch date is rumoured to be either October or November. However, the latest release date rumour suggests the OnePlus 6T will be announced on October 17.

Currently, there is no word on the OnePlus 6T price yet but we expect that this device will be costly as compared to OnePlus 6 because of its an in-display fingerprint scanner.