Oppo has recently announced its highly anticipated Reno family of mid-range smartphones. However, these handsets were announced for the Chinese market. The series includes the Reno8, Reno8 Pro, and Reno8 Pro+. At that time, it was revealed that the handsets will make their way to all other markets internationally by the end of this year. Furthermore, we have come to know through Geekbench that Oppo Reno8 Pro will make its way to the international market as the rebranded version of Pro+.

A benchmark listing for the Oppo CPH2357, which is linked with the Reno8 Pro has recently revealed that the Reno8 Pro+ will be sold outside China as Reno8 Pro. It will lose the “+” on its way to the international markets.
According to the latest reports, the handset will run the MediaTek Dimensity 8100 SoC at the helm. It is the same chip used by the Reno8 Pro+ in China instead of the Snapdragon 7 Gen 1 of Reno8 Pro+. According to the latest reports, the upcoming international variant Reno8 Pro was tested with 12GB of RAM and with Android 12. It has got an 898 single-core score and 3,555 multi-core score. Let’s have a look at that: 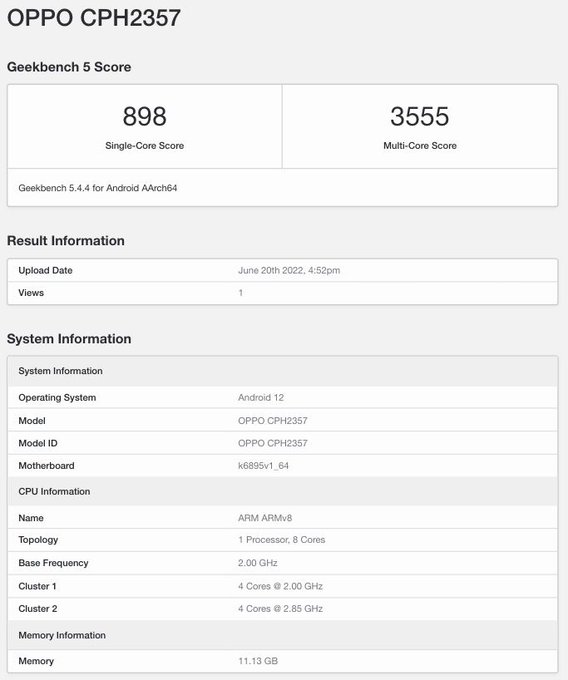 The international variant is expected to have a 6.7″ 120 Hz 1080×2412 AMOLED touchscreen. It will boast a triple rear camera system including 50 MP main, 8 MP ultrawide, and 2 MP macro module. In addition to that, it will come with a 32 MP selfie camera with autofocus. Moreover, the handset will be powered by a 4,500 mAh battery with support for 80W fast charging. There had been no further details regarding the handset. Stay tuned for more updates. Let’s see what Oppo offers to its new handset.