Now people from any part of country can book their ticket easily by using this application. No extra payment would be charged from the passengers for the service.

The launching ceremony was held at Pakistan Railway Headquarters. The ceremony was attended by railway CEO Javed Anwar, GM Anjum Rarvez and many other railway officials.

Now people using smart phones can download App for advance booking. Few months back E-ticketing system was also introduced in order to facilitate passengers. Minister told that IT department of Railway is working very hard for people to facilitate them with modern technology.

Now a days 70 percent of people who travel through railway use internet and smartphones. It means such large number of people would be getting benefit from this application. The minister further told that about 350 trains are being air conditioned for ease of travelers. He told that soon they will restructure 2000 old trains. 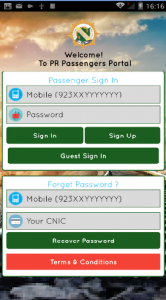 How to Register on Pakistan Railway App

Now users can download App named Pakistan Railway Official from Google App store from android mobile phones. After registration user will get a registration ID number for creation of a railway e-wallet. To buy a ticket money will be loaded through e-wallet mobile payment system. This money can be payed either online or at a ticket counter at any station. 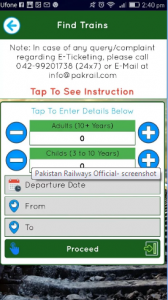 The Pakistan Railways has also introduced the latest digitized technology in trains and railway stations to facilitate passengers. This is indeed a very developing step for middle class who travel through railway. Right now the App is only available for cellphones running on the android operating system.