After free laptop episode, Punjab Government has raised the requirement of Android based Smart Phones for its various departments. In this regard, Punjab Information Technology Board (PITB) has invited the bids from the interested parties through an advertisement in the media. 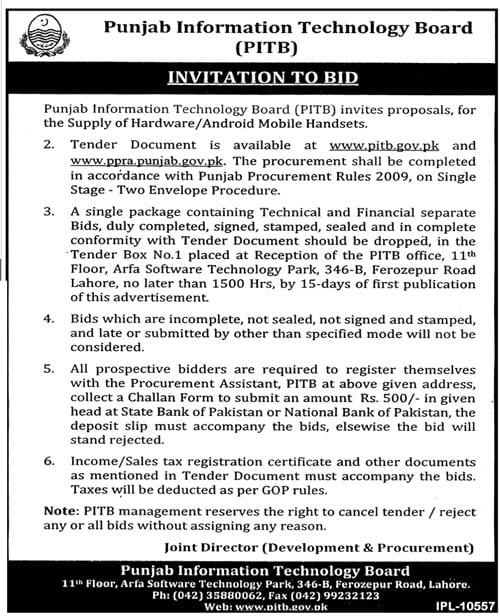 Although media advertisement does not reveal the number of required handsets nor the details are available on the PITB’s own website but sources reveal that Punjab Government is asking for some 29, 500 Android Smart Phones.

The advertisement does not even show the specifications of the desired mobile phones but MORE has learnt that required mobile phone should have at least 512 MB of ROM, 512 MB RAM, 32 GB of external memory, Android 2.3 (Gingerbread), 600 to 800 MHz of processor, Capacitive Touch Screen. It should have capability to run GPRS/ EDGE as well as 3G, although the latter is not available in Pakistan yet.

According to advertisement, suppliers have been asked to provide best possible bids within 15 days as per Punjab Procurement Rules 2009.

Government of Punjab has decided to make use of popular Android platform for bringing efficiency in its day to day working. The planning department is already developing Android applications that are meant to enhance the level of productivity using latest technology. Punjab Government has already worked on pilot projects with reference to Health and Education in association with USAID. These pilot projects were meant to monitor the performance of teachers and nurses (lady health workers) who are working in the rural areas of the province after it was observed that in the smaller cities and rural areas government staff remains absent and does not perform the duties.

Currently, Samsung, HTC, Huawei, QMobile are the companies dealing in Android Smart Phones in the official capacity. Which of them will be able to meet the requirement is yet to be seen.

Ericsson to show the power of limitless connectivity, spurring innovation and sustainability at Expo 2020