We all know that Samsung has plans to adopt a new smartphone strategy by introducing new alphabetical lineups. According to some previous reports, Samsung is said to have plans for “several” new smartphone lines. The new lineups will play a major role in Samsung’s strategy in the smartphone market to move forward. Last month, a report revealed that Samsung had plans to scrap its Galaxy J series entirely. Moreover, the company was expected to replace it with a new set of Galaxy M-series. This all seems to be true as Samsung’s upcoming Galaxy M series has surfaced in the Geekbench database. Recently, Samsung Galaxy M2 surfaced on Geekbench.

Samsung Galaxy M2 Will Be Powered By an Exynos 7885 chipset

“Samsung Galaxy M2” has the model number SM-M205F. The phone will be powered by an Exynos 7885 chipset. The Exynos 7885 is a 14nm chip. It comes with two relatively fast Cortex-A73 cores and six A53 cores. In addition to that, it also features a Mali-G71 GPU. It is the same that is being used in the 2018 edition of some Galaxy A series. The phone is expected to have a 3GB of RAM. Furthermore, it will likely be paired with 32GB storage. 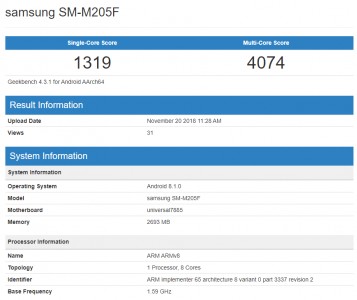 According to reports, the Galaxy A series will continue to focus on providing a quality experience across different price points for a wide range of users. However, the new lineups including Galaxy M series are expected to cater towards more specific groups of consumers and markets. Let’s see what will be Samsung’s strategy to move forward in the Smartphone market.