For a long time, people were demanding a way to edit tweets however Twitter remained silent. Even other social media platforms, like Facebook, Instagram and TikTok facilitate users by providing them the functionality to edit posts and statuses. Since Twitter’s inception, this feature was not available might be due to the company’s different approach but now finally Twitter edit button is in testing.

It’s a big change for Twitter, and the edit button is expected to be released by the end of this month after it passes the testing phase. Right now, this feature is made readily available for Twitter Blue subscribers, who are paying  $4.99 per month for service to access premium features.

The edit button will be launched in phases. Initially, the test will be localized to a single country and expand later when Twitter is able to discover the usage of this new button by users. While telling about this, the company said that:

“We promise to pay close attention to how the feature impacts the way people read, write, and engage with” 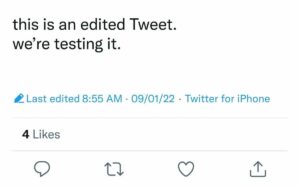 If you are not one of the lucky users who are chosen for testing, or you have not subscribed to Twitter Blue, you will still be able to see if a tweet has been edited.