As the #WorldCup drama unfolded on the pitch in Brazil, it also played out on Twitter in a big way: Football fans across the globe discussed every exhilarating and emotional moment as it happened.

[blockquote cite=””] After 64 thrilling matches, Twitter compiled the numbers and their visualizations that illustrate just how massive the Twitter conversation has been since the #WorldCup
[/blockquote] [info]There were 672 million Tweets sent related to the 2014 WorldCup[/info]

Whether the crowd was reacting to a big goal, predicting the outcome of the next match, or discussing the latest injury or controversy, fans came to Twitter to discuss the games 672 million times. Every minute of every day it seemed fans across the globe were discussing the drama of the tournament.

Of the 672 million total tweets, people discussed every bit and second of matches in their tweets. During the semi-final between Brazil and Germany, fans sent more than 35.6 million Tweets — a new Twitter record for a single event. Here are the top five most-tweeted matches from the #WorldCup:
[list style=”list4″ color=”blue”]

[/list] [info]Fans sent 618,725 TPM when Germany won the WorldCup Final[/info] The most-tweeted moments occurred during Brazil’s devastating 7-1 semi-final loss to Germany on July 8, while the other top moments came in the Final match, where Germany defeated Argentina. [info]Most-mentioned player on Twitter during WorldCup[/info] 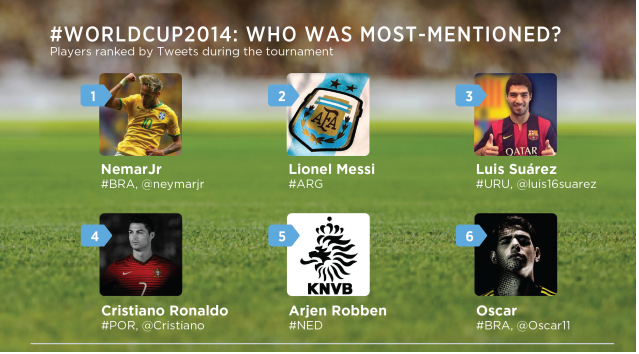