WhatsApp Facebook-owned app has finally rolled out a feature that enables users to move their backup messages/ Chat Transfer between iOS and Android phones, although it is currently available for Samsung users.

The new feature is only available to Samsung phones, as WhatsApp has announced that it is finally being implemented. This may not be easy to transfer data as WhatsApp has many cloud services on Android and iOS to back up.

To start the procedure both devices need to be linked through USB-C to Lightning cable, remember that wireless connection is not supported. It can transfer information, profile photos, conversations, group chats, chat history, media, and settings from your account. However, it will not be transferred your call history and display name to the android device. Complete information and procedure can be found here. 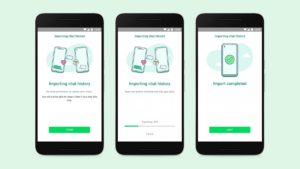 Older versions of Android will soon be supported this feature. According to reports, the procedure is accessible only when customers initially set up their Samsung phone; this means that users may have to factory restore their phone if they are already using the smartphone.

At the moment, the source has also pointed out that the technique only works one way between an iPhone and Samsung. Furthermore, there is still no capacity for conversation transfer from an old Samsung phone to an iPhone.