A teaser poster was published earlier today on Weibo. It unveiled that the upcoming gaming handset will see the light on October 23. Unfortunately, the poster doesn’t say anything in particular about the smartphone. It only says that five days are left in the launch of Black Shark 2. Let’s have a look at that: 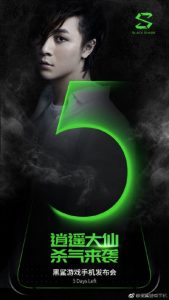 According to the previous reports, the phone doesn’t look different from its predecessor and is certified in China under the AWM-A0 model number. The first-gen of Xiaomi gaming phone has its fingerprint reader below the screen, this early sequel appears to adopt a rear-mounted biometric sensor.
Xiaomi Black Shark 2 will have the dual rear camera setup arranged vertically. However, the look the of backplate will be quite simple. Moreover, it will have a 5.99-inch screen size. The dimensions suggest that Xiaomi Black Shark 2 Gaming Phone will be bit taller and slightly thicker than its predecessor. The upcoming gaming phone will be packed with 4,000 mAh battery that will keep the lights on.
According to the score sheet, the Black Shark 2 will ship with Snapdragon 845. It will feature 8GB of RAM. In addition to that, the phone will come with Android 8.1 Oreo straight out of the box. We had no official words about this gaming handset yet. However, we will not have to wait too long as only 5 days are left in its launch.