Zong has tried to capture the attention of masses with its marketing campaign that has gone viral. After roll out of Jazz’s very impressive advert “Anthem-Hum Jazz Hain”, Zong has come up with another idea. Zong has released a campaign Zong Directly Hits Jazz by Telling People to Ride the Right Network.

The TVC released by Jazz on it’s farewell ceremony to Mobilink and Warid was a super hit. People loved the creative idea behind that add. Jazz and Zong being 4G are competitors and keep on taking such moves, keeping the ball in their court. Now Zong has tried to bring the ball back by spoofing this picture. The Ad. clearly attempts to hit on Jazz. Creatives behind it have knocked out Jazz’s efforts in their own style. 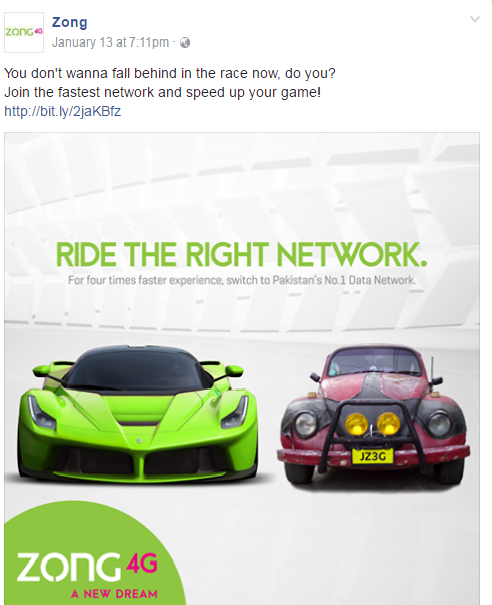 In the above picture the green car that is actually a sports car is Zong. Sports cars are famous for their speed. The red car is Foxi which directs to the slow network of Jazz as Foxi is a slow and old fashioned car having number plate of “JZ3G“. The number plate JZ3G clearly shows that Zong is making fun of their 3G Network which is now upgraded to 4G by their merger with Warid. In this advert Zong has asked people to ride the right network which is four times faster that the other. The colors of cars go with the logos of both companies that is green and red.

It is seen that mobile operators keep on hitting each other’s services via such adverts. Previously advert of Jazz featuring Nargis Fakhri was trolled by Ufone. Ufone took advantage of the Nargis Fakhri advert that had become one of the most widely discussed topics on social media lately to create a hilarious version of the advert. Faisal Qureshi posed in the exact same manner as Nargis Fakhri in Ufone’s advert.

It seems that the mobile operators are just busy in “media war” these days.