Zong, a China Mobile company and Pakistan’s fastest growing telecom network, who became the first and only 3G and 4G telecom operator in the country, has organized a press conference ‘Zong Super 3G’.

As Zong Organizes a Press Conference to Announce 3G Packages. So This conference is organized to announce the much-awaited 3G packages for Zong customer. Zong has already geared up to provide the benefits of Super 3G and 4G LTE connectivity across Pakistan and is now poised to make a greater difference in the industry as a leading telecom player.

Zong is one of the competitive Pakistani telecom operators since 2008, having the fastest growth in subscriber base in the industry which allowed the company to take over the third position by surpassing Ufone. Zong customers are hopeful that there will be treat for them in the ‘soon to be’ announced 3G packages.

The event will take place on Thursday 4:00 PM, 12th June, 2014 at Zong Headquarters Chak Shahzad, Islamabad.
Dr. Fan YunJun, Chairman and Chief Executive Officer, Zong and the PTA chairman, Dr. Ismail Shah will be present at a ceremony in Islamabad. 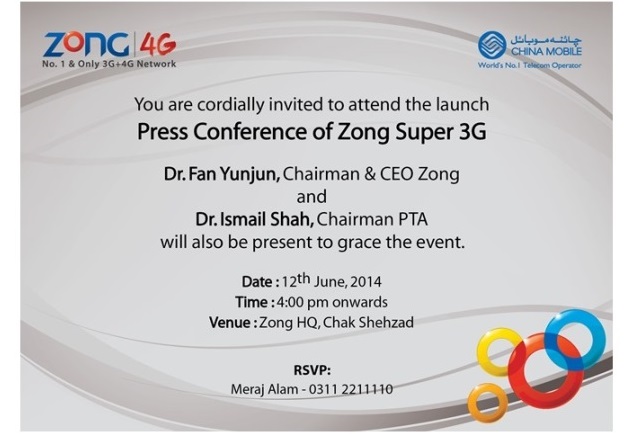