Google has been working on simpler user interfaces for all its Apps. They are trying to declutter the less used icons and tabs so that they can provide a better user experience. Google has been working to bring a simpler U1 for its Google Play App since the start of this year. Recently, we came to know that Google Play App has started receiving a new UI that is quite simple and user-friendly.

The new update has started rolling out to a wider range of people. The new stable update has brought some new changes to the App. The most noticeable change brought to the App is that the navigation drawer is now exclusive to apps and games. On the other hand,  the shortcuts to the media apps like Play Movies & TV and Play Music are moved in the hamburger menu right present right below the Settings. The update also brought Material Design language together with a brighter UI theme. The theme is based on green and white color. Most of the layout theme is in White color which gives a very bright and fresh look. Let’s have a look at that: 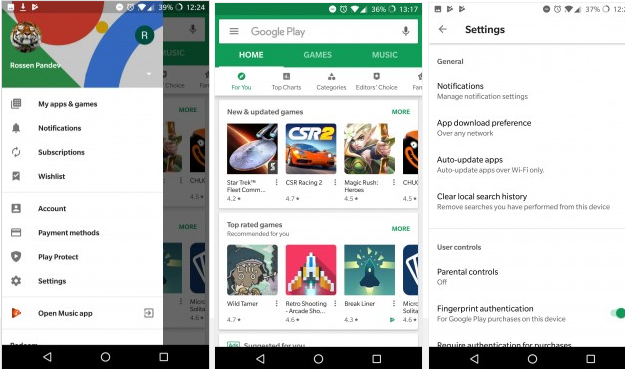 The bad part is that the menu is now missing the search option that was present in the upper-right corner. However, the Account menu has also been re-organized. Moreover, the accounts menu now contain options for tabs instead of a list. In addition to all this, the Wishlist menu is now present with Notifications and Subscriptions. This option is available on the slide-out hamburger menu. The new update is server side. If you are running the older version, restart your App. According to some latest reports, we have come to know that Google Hangouts will shut down in 2020.  However, the app will work as a business-only.