Sony keeps on introducing new handsets in order to give a tough competition to its rivals. Recently, we have come to know that the company is prepping to launch Sony Xperia X20. Together with that, we got our hands of its alleged specs as well. According to the leaks, the upcoming handset will feature Snapdragon 710.

According to the leaks, Xperia 20 will feature a 6-inch FHD+ display with a 21:9 aspect ratio. The smartphone is tipped to be the same as that of Xperia X10 design-wise. In addition to that, it will not come with any notch or punch hole design. Moreover, it will have thick bezels that according to me is not a good feature.

Moreover, the Xperia 20 will be powered by the Snapdragon 710 processor that will give it a significant boost in processing performance as it swaps the Snapdragon 630 of the Xperia 10. In addition to all this, the processor will be paired with 4GB or 6GB of RAM and 64GB or 128GB of storage. According to the source, Sumahoinfo, the upcoming handset will have two 12MP cameras on its rear. However, there are still no words regarding the selfie snapper and secondary lens right now. 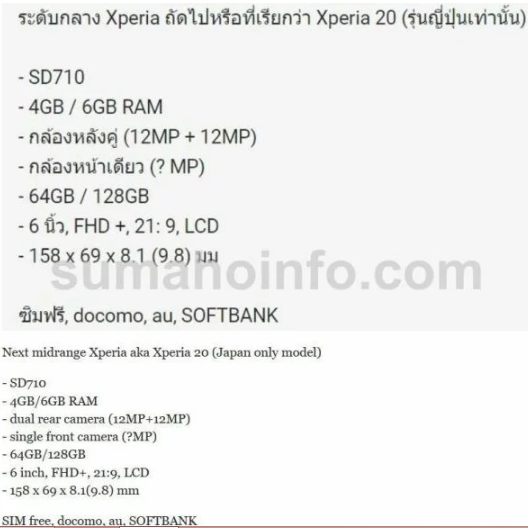 Xperia X20 is expected to be better than its predecessor. However, it will come out to be a mid-ranger according to me. Let’s see what Sony offers in its upcoming handset.