Apple company has long been rumored to be planning on a foldable iPhone to compete with the likes of the Samsung Galaxy Z Fold 3 in the finest foldable phones competition, but a newly discovered document implies that the company’s first foldable might be iPad branded.

Apple is likely experimenting with several foldable phone designs. Apple has been said to be working on a book-like foldable phone as well as a clamshell folding phone, but now we have evidence of another design. According to Patently Apple, the patent indicates that Apple is considering a dual-screen solution rather than a single one. The two displays appear to be housed within a flexible casing with its own internal hinge mechanism, which is held in place by magnets to allow the gadget to be used in multiple configurations. A newly leaked Apple phone may be developed on split-screen foldable model, identical to the Microsoft Surface Duo.

Also Read: How to encrypt WhatsApp data on Google Drive 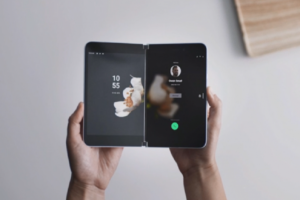 According to the patent, even if the panels are split, the display will stretch over both displays once the device is opened. However, various speakers in different locations can be utilized to play distinct audio channels of an audio recording. All of the additional gear, such as the camera arrangement and the diversity of sensors aboard, may be utilized in conjunction with one another. The patent does not specify the sort of hinge that will be used, although it will most likely be comparable to the Surface Duo. Magnets will be utilized to seal the gadget and to use it in various positions. The phone, like the Samsung Galaxy Z Fold 3, may be utilized in a variety of folding orientations.

This Apple foldable might also serve as a laptop with a virtual keyboard. Because it is simply a design patent, there is no certainty that it will become a retail gadget, so take this with a grain of salt.

You may be also interested in: Xiaomi Plans to Manufacture its Very First Electric Vehicle in 2024