A couple of months ago, Facebook made an announcement that it’s going to remove clutter from the Messenger app. The social giant, Facebook revealed that they will try to simplify its user interface in order to provide an improved user experience. Recently, we have come to know that Facebook Messenger Redesign is rolling out to all users.

The number of shortcuts and fancy buttons that were not used by most users have been removed. There are just three new tabs for the users now instead of nine that brought clean-looking whitespace to the interface.  The three tabs are chats, contacts, and an explore tab, similar to Instagram. Reducing the number of tabs have made the interface simpler and easier for the users. In addition to that, all the irrelevant features have been moved to a single tab on the right. The explore tab now includes games, nearby businesses and other shortcuts so that they don’t disturb your chatting experience. The User Interface has been cleaned up making things easier to find. Furthermore, Performance issues, bugs, and other problems have also been fixed. 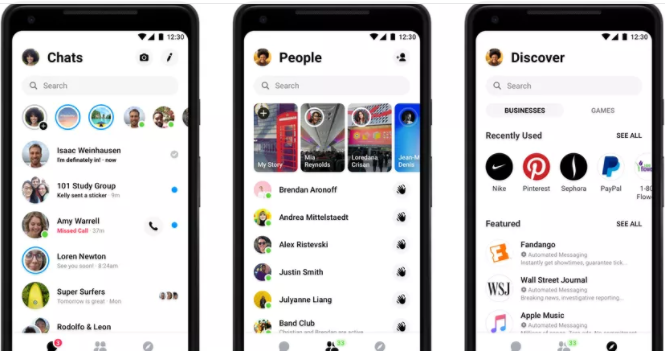 According to the latest reports, it is also said that dark mode will also make its way to the App. Even though, the Facebook-owned messaging app has started rolling out the dark mode option to a limited number of users living in just a handful of countries. However, we don’t know the list of the countries in which this feature is under testing. The latest reports have unveiled that this new feature will soon make its way to all Messenger App users. This new mode will be quite similar to the other implementations.  Facebook Messenger’s new feature will turn the previously-white background black. Let’s see when will this dark mode implementation make its way to our Apps.