Gmail is a free, advertising-supported email service developed by Google that is being used by many people all over the world. Nowadays Google is facing a huge controversy related to Gmail users. The Wall Street Journal reported today that the third-party app developers can read the emails of millions of Gmail users.

Gmail’s access settings allow data companies and app developers to view users’ emails and private details, including recipient addresses, timestamps, and entire messages. These apps also require users consent but the user consent form is not that clear which results in allowing computers as well as humans to get access to your private information.

While discussing this controversy the company stated to Wall Street Journal that:

Google employees may also read emails but only in “very specific cases where you ask us to and give consent, or where we need to for security purposes, such as investigating a bug or abuse,”

If you have ever seen a request as shown below then it means that you have granted access to your private information to the developers. 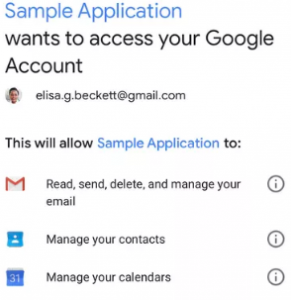 There is actually no evidence that third-party Gmail developers have misused data. They are just able to view and read private emails crossing the privacy boundary. We actually don’t know that how secure their system really is. Last year Google users fell victim to a phishing attack that disguised itself as a permission request from Google Docs to gain access to user contacts using the same authorization system. So, Google needs a bunch of improvements in their permission systems to avoid such suspicious activities that can harm people’s privacy.