Huawei is a global leader in telecom technologies and solutions, offering a wide range of powerful smartphones and devices in the Pakistan market. As the popularity of Huawei’s products has rapidly expanded to every corner of the country, the high-tech enterprise has now appointed a young and vibrant Pakistani heart-throb – Shehryar Munawar as its Brand Ambassador in Pakistan, to endorse and promote Huawei’s fascinating range of smart devices.

Huawei started its branding journey in Pakistan by signing up the beautiful actress – Mahira Khan as its very first Brand ambassador. The streak of celebrity endorsements continued as the gorgeous Humaima Malick took over as the “new face of Huawei”. Following these two stunning ladies, the new TVC campaign of Huawei Honor 4C  will show the handsome Shehryar Munawar, highlighting the smart phone’s powerful features like; Panoramic selfie, Ultra snapshot, burst photo and many more. 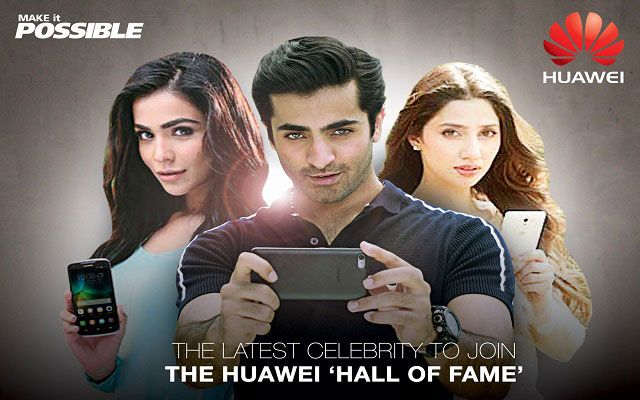 Shehryar Munawar Siddiqui is a famous young actor, model and film producer, who attained celebrity status for his acting performance in the Hum TV Drama serial “Meray Dard Ko Jo Zuban Miley”. Initially, Shehryar appeared in showbiz as a model and later he ventured into acting and production. Today, he enjoys outstanding popularity in the Pakistani media, especially among the younger segment of the audience. His other notable performances were seen in roles such as; Tanhaiyan Naye Silsilay, Kahi Un Kahi, Zindagi Gulzar Hai and Aasmanon Pay Likha.

Within a very short span of time, Huawei’s revolutionary products have captured the hearts and minds of the consumers in Pakistan, thus achieving great success through its pioneering technologies. Its feature-rich devices are promoted through an extensive distribution channel across the entire country and the deployment of a highly competitive workforce. Thus, Huawei is delivering exceptional services to the rapidly expanding segment of smartphone users in Pakistan, who seek powerful global connectivity and info-tainment, round-the-clock, on-the-go.