GOBEE is not only water repellent, and anti-rusting, but also has alloy rim wheels combined with an anti-sweat technology sofa seat.

Arbab aims to assist people with disabilities through technology. The smart wheelchair offers Bluetooth, Wi-Fi, and a remote control which goes over the range of a 100 feet.

The young student being the founder of Ayub Yaqoob Engineering Company (AYECo) has already started distributing GOBEE in the Pakistani market. In future, the product may also be exported after its compliance with International Health Regulations (IHR) of World Health Organization (WHO). 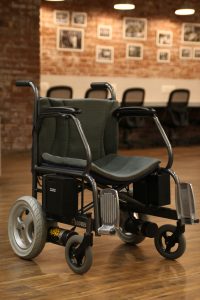 Initially Arbab was not really confident that the National Incubation Center (NIC) at LUMS would acknowledged his idea. Although he was able to design an electric wheelchair many years ago and scored victories in science contests while doing his graduation from UET Lahore, he gave up on his dream and pursued a full-time job.

However, soon he quit his job to make his dream a reality. Arbab had to take a fresh start since he had sold out all the hardware equipment. However, it didn’t let him down as NIC Lahore has identified the potential in his product and selected him for their incubation programme.

Future plans for GOBEE include an IP Camera and Artificial Intelligence. Currently, Pakistan imports smart wheelchairs, and with the advent of a localised product to effectively cater to people’s needs, the market could really open up for GOBEE.

The Lahore University of Management Sciences (LUMS) is a world class academic institution with a proud history of achievement and ambitious plans for the future. Since its inception in 1985, LUMS has strived to achieve the aim of imparting world class education while encouraging research and intellectual growth in the country.

The University has five schools, namely, SulemanDawood School of Business, Mushtaq Ahmad Gurmani School of Humanities and Social Sciences, Syed Babar Ali School of Science and Engineering, Shaikh Ahmad Hassan School of Law and School of Education. LUMS has played a key role in setting high standards of academics and producing professionals who can compete with counterparts from any university across the world.