Covid-19 is a horror story, and people will remember it for quite a long now. The chaos it creates is somehow managed. Covid news is all over the internet. Whether true or false, it is present on the web. Sometimes, it becomes difficult to spot the real one among tons of other fake news. But, the representatives of authentic sources like WHO and other organizations are the correct means to get ‘genuine’ news.

Spokesperson Marjorie Taylor Greene of Georgia, a conspiracy-theorizing, gun-toting, fake-news-spreading congresswoman, was permanently banned from Twitter on Sunday for disseminating COVID falsehoods. Greene will be unable to use her account as a result. If you try to access it right now, you’ll get a message saying the account has been suspended. Her account has been disabled indefinitely after she breached Twitter’s five-stroke guideline on COVID disinformation. 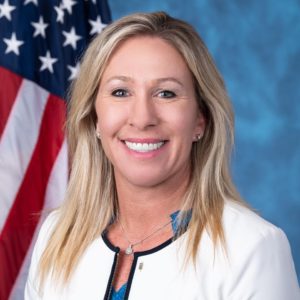 In a release, Twitter said, “We’ve been explicit that, according to our strike policy, we will completely suspend accounts for multiple violations of the policy.” Taylor Greene has behaved online as though she is that family member who no one wants to see at Christmas. Throughout the pandemic, she inevitably played all of the deadly, false conspiracy theory favorites. She’d previously been suspended temporarily for anti-vax postings, but it’s unclear what pushed her over the line on Sunday. 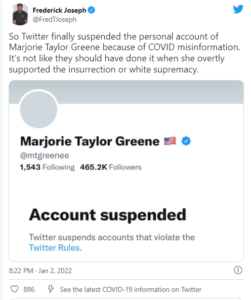 Users on the internet were relieved to see Greene go. Greene’s official state account is still active, it’s worth mentioning. Still, it’ll only be a question of time before right-wingers are incensed by Greene’s ban, shrieking about how hazardous it is to free speech. However, Twitter has every right to ban users from its site, particularly when they propagate false information about an illness that has killed many.