Motorola One Macro Appears on Geekbench Revealing some Key specs

The Geekbench listing revealed that it will come with Helio P60 SoC. It will have 2GB RAM. So, it will be a low-end smartphone. Moreover, the phone will run Android Pie out of the box. The smartphone achieved a score of 5,584 and 1,429 points in Geekbench’s multi and single-core tests, respectively. 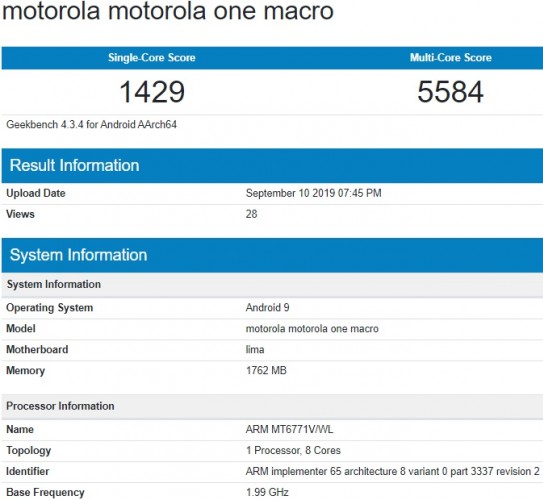 Unfortunately, this is all that we know from the listing. However, there are some rumours about the phone also circulated on the internet. The rumours revealed that the phone will sport a notched display, thick chin, and a purple-coloured power key button.

There is no word about the launch of the device revealed by the company. But we hope that the launch is imminent. However, by seeing the specs we can say that it will be a low-end smartphone. So, definitely it will cost less. Let’s see what actually the company will offer in this phone.