We already know that Motorola is working on a new device called One Zoom. Recently, we got the leaked specs of the phone. Now the phone appeared on Geekbench. Moreover, Motorola is having an announcement at IFA this week. So, we can expect the launch of One Zoom then.

Motorola One Zoom will be a mid-range Smartphone

The device appeared on Geekbench with the name of “Motorola Motorola one zoom”. It reached scores of 2,381 for a single core and 6,551 for multiple cores. From the scores, we can say that the device will have the Snapdragon 675. As the devices like Samsung Galaxy A70 or the Redmi Note 7 Pro also have the same scores and have landed with Snapdragon 675. 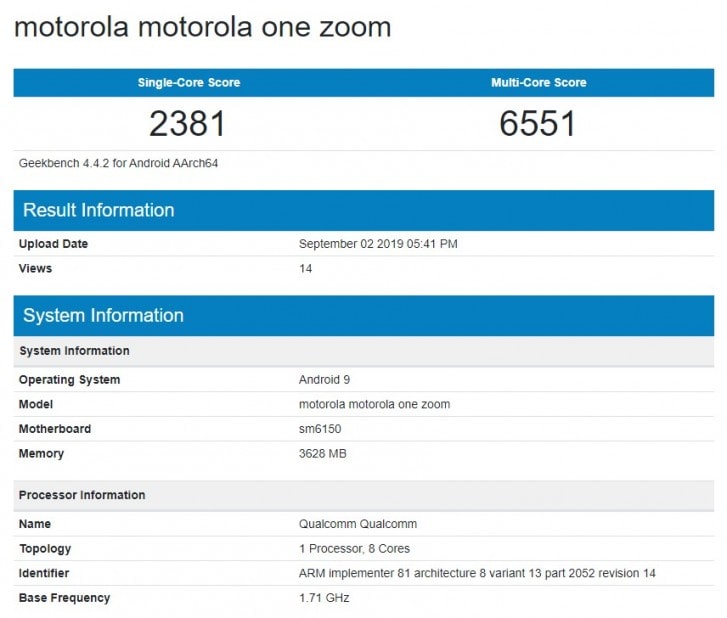 The Geekbench listing revealed that the phone will come with 4 GB RAM. Moreover, it will run on Android Pie out of the box. Unfortunately, this is all that we came to know from the listing.

However, the previous rumours revealed that the phone will have a 6.4” AMOLED display. It will also have a built-in fingerprint scanner. Not only this, but there will also be a 25 MP selfie camera. In my opinion, the selfie camera will be the most attractive feature of the phone if the resolution is true. Also, the phone will feature a 4,000 mAh battery with up to 18W fast-charging capabilities. Moreover, the rumours also revealed that it will come with four cameras at the back.

There is no word about the price of the phone. By seeing the specs we can say that it will be a mid-range phone. Let’s see what actually the phone will feature and at what cost.