Samsung announced Galaxy A8 ( 2018) and Galaxy A8+ (2018) by the end of 2017. Now a new phone from Samsung has just appeared on Geekbench with model number SM-A750FN. Samsung Galaxy A (2019) series of phones could be the first Samsung device to have three cameras.

Mysterious Samsung Galaxy A (2019) Popped up on Geekbench

The phone will come with Exynos 7885 SoC that has two performance cores at 2.2 GHz and six more for efficiency at 1.6 GHz. The RAM on the SM-A750FN is 4 GB and the phone is listed with operating system Android Oreo 8.0. All specification are same to Galaxy A8+ (2018). It shows that the new phone might be different in some other aspects like screen size or camera.

Samsung Galaxy A8+ has code name SM-A730xx, whereas its predecessor Galaxy A7 (2017) was codenamed SM-A720xx. It seems that Samsung Galaxy A series of 2019 will be special series phones. The current rumours suggest that Samsung could loosen its purse strings for the hardware of its Galaxy A (2019) series of phones. 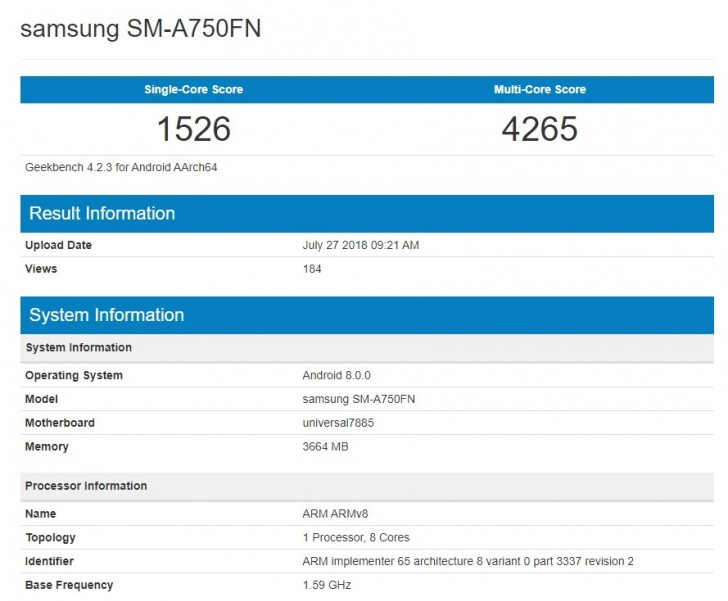 This move is made in order to increase the sales of budget phones as Samsung sales are constantly falling down this year.  Reportedly, the sale of Galaxy S9 sale is the slowest of any Samsung flagship phone since the Galaxy S3. The company managed to sell just 9 million units of Galaxy S9 in the second quarter.