The Nokia 9 is HMD Global’s long-anticipated flagship phone that is expected to release this year. However, we still don’t know its original launch date but hopefully, it will make its way to the markets this fall. The upcoming flagship had been leaked on various occasions. Recently, a leaked image showed up. Nokia 9 Leaked Live Image shows a crazy never-before-seen camera set up at the back. It gives information about the integrated battery too.

NokiaPoweruser has leaked a live image of the Nokia 9 showing the back of the device. It is seen sporting the Penta-lens camera setup similar to previous leaks. Furthermore, the image gives out information on the integrated battery as well. 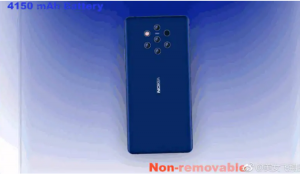 The leaked image further gives information that the upcoming phone will sport a non-removable battery. The Highly anticipated Nokia 9 will be powered by a massive battery of 4150 mAh. The smartphone is also rumored to sport an in-display fingerprint sensor. It will make it the first Nokia-branded handset to achieve the feat. The leaked device is sporting a Blue back, hinting at one of the possible color options at launch as well.

It was also reported to launch at IFA 2018 but that didn’t happen. The Penta-lens camera setup may be the reason for slow-scale production.