Almost two weeks back, Oneplus served the Android Pie Open Beta Update for the OnePlus 5 & 5T. Recently, we have come to know that OnePlus 5 & 5T Android 9 Pie Based Update, OxygenOS 9.0.0 is rolling out to all the users.

The update has brought many new changes. The Changelog is quite different from the Open Beta Version’s Changelog. The changes related to Parallel Apps, Weather and Communication are missing. However, it is possible that the missing upgrades will be added in the future software updates for the phones. 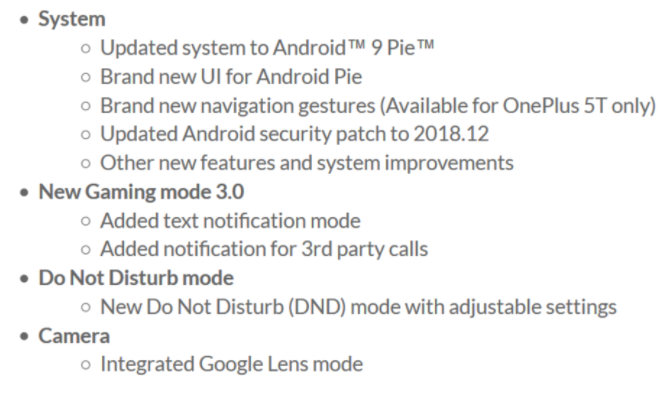 The OTA update weighs 1.742GB for the OnePlus 5 users. On the other hand, it weighs 1.748GB for the OnePlus 5T users. The smartphone owners will automatically receive the OTA update notification. However, if you want to manually trigger an update search, you can head over to the System Update option in Settings. OnePlus has announced that this OTA update will roll out in phases. Only a small number of users will receive the update today with a broader rollout beginning in a matter of days. OnePlus staff members have further revealed that the company has worked on this update to make sure that owners of the OnePlus 5 and 5T would receive this “Christmas gift.”
Laiba MohsinLast Updated: Dec 27, 2018
Share
Facebook Twitter Pinterest