Nothing is better than OPPO despite the price that is higher than most of the smartphones in the market. The real things is that OPPO uses the gadgets of the world’s most outstanding companies like the processor is being used of the Qualcomm, Camera been used is of Schneider-Kreuznach, the storage area/ROM been used is of Samsung. The glass is scratch proof i.e Gorilla glass 4 has been used. Again its OPPO, the smartphones manufacturer for manufacturing the world’s most sleek, smart and slim device and has been awarded with that as well. So, one can expect a high price from a smartphone having the most valuable pieces of hardware. Just go through the OPPO R7 Review and get benefited with the knowledge of the hardware been introduced inside the OPPO R7 module.

There was a rumor about the device that OPPO R7 is going to be released with Mediatech MT6795 SoC which is a high-end 64 bit Octa-core chip, the biggest base. But the actual thing is something greater than that and OPPO R7 has been released with Qualcomm Processor (Snapdragon-615) with chip-set Inc MSM8939. This processor is a high end processor that supports high bands of Networks like 4G-LTE, a camera with power up to 13 MP with an ISOCELL sensor with lens made by Schneider-Kreuznach, USB 2.0, GPS, NFC, Audio/Video with 1080p60 playback with H.264 (AVC) and H.265(HECV) formats, QRD supported, Memory/storage LPDDR3 800MHz single-channel 32-bit (6.4GBps)/eMMC 4.51 SD 3.0 (UHS-1), process technology 28nm LP. 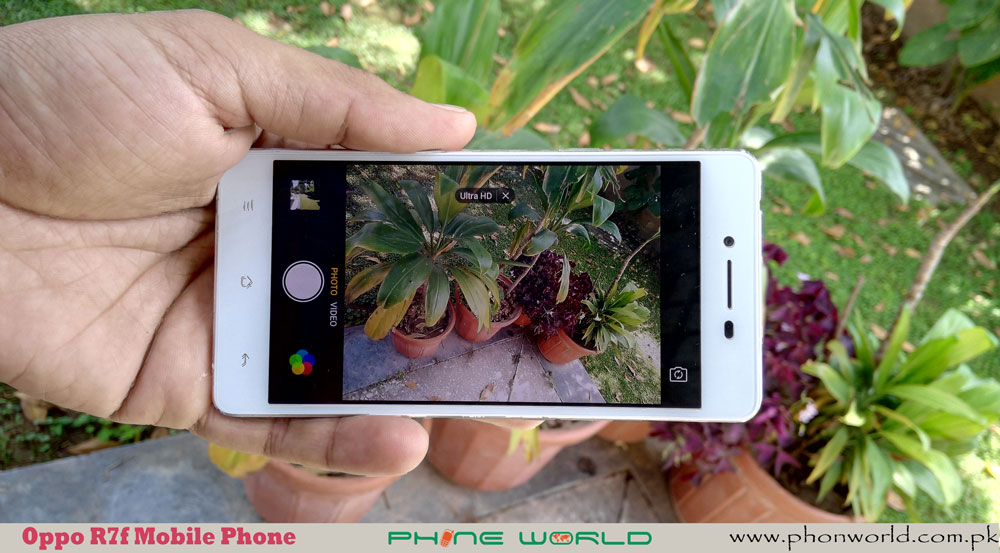 The device has a fair cool look that matches with the fittests. Being one of the most sleek devices, OPPO R7 makes no burden on the user nor is felt inside the pockets. Its dimensions are (144*72*4.85)mm which categorize it again in the world of the sleek devices.

OPPO R7 is powered with Qualcomm Snapdragon-615 processor with 1.5 GHz Octa-core speed of 64-bit type with 8 cores. The frequency fluctuates in between 800.0~1459.0 MHz. The chip-set used is MSM8939 of Qualcomm Technologies. The first 4 cores of the processor have frequency in between 800 MHz as low and 1459 MHz as its high. On the other hand, the last 4 cores behave different and have frequency of 800MHz as its low and 1113MHz as its high. This proves that the first cores have a speed of approximately 1.5MHz and the last 4 cores have an approximate speed of 1.1MHz.

The device is fitted with a 3GB RAM which runs smoothly with the Octa-core processor and you can expect OPPO R7 to be the best with a large many applications and games with better graphics and heavy data with fluency, frequency and efficiency.

OPPO R7 has 5 inches display. Testing the device with GPU bench mark shows that the device scored 12,766 points on the board. Nice thing is that the “screen resolution normalized score” is much greater than a large many smartphones that we have checked in our reviews. The GPU is Adreno (TM) 405 Qualcomm. GPU Version is OpenGL ES 3.0, GPU Frequency is 220MHz~550MHz. The display resolutions are 1080*1920 along with 480dpi. The screen supports up to 4 consecutive touches simultaneously. Consult the GPU Bench mark portion at the end of OPPO R7 Review.

The battery is un-removable and not replaceable. Works fine and sound with its Octa-core processor and 3GB DDR3 RAM along with its powerful GPU that boosts perfect graphics over the screen. The battery is Li-ion Not-replaceable and is 2320 mAh.

The rear camera is 13 MP with lens of Schneider Kreuznach as shown in the Antutu which takes snaps with (4208*3120) dimensions in the normal mode. The size of the image increases up to 7.70 MB in perfect daylight and with (5824*4368) pixels in HD mode. Camera is guarded with a silver band around it and is supported with an LED Flash-light which looks small but works fine like the flash-light of iPhone, having small size with good results.

The front camera(selfie cam) is also better than many other smartphones and it is 8MP with (3264*2448) pixels. The selfie cam is also loaded with many options like normal and beauty options plus a cart is also introduced for more options to be purchased. This will enhance the worth of the camera.

The above snaps show the followings in OPPO R7 Review.

The below images shows the following points.

Beauty needs no paint. The stylish look, awesome camera and the un-scratch-able Gorilla glass 4 along with the display have been shown in the following images.

The images below show that the device has a better size of 5 inches display and the thumb can touch nearly all corners of the screen with ease. The second image shows that the device is not more than a bundle of 20 notes that will make you feel free while taking OPPO R7 in your pocket. The third image shows the logo and the camera position that has been adjusted in the upper left corner supported with a flash light beneath it.

The snapshots below(in the OPPO R7 Review) shows that:

This is the main area where we can check the smartphone and all its components by passing them through with a series of different tests for its display, camera, processor, RAM, ROM, GPU and all other portions of a smartphone.

Scoring over 30 thousands with Antutu proves that the device OPPO R7 is a high-end smartphone with a fast Octa-core processor, efficient RAM and ROM for storing data with better display and a powerful camera. The device has the power to run high-end games and graphics acquired GPU apps.

Checking with Qualcomm’s app, the so called Vellamo shows that OPPO R7 gets 988 points for its single core test, 1109 for its aggregated 8-cores and 2444 for its chrome, proving that the device is fast and efficient especially with the browser’s point of view.

Everybody knows the worth of Samsung Galaxy Series and its specifications and rank. We have compared the scores of Samsung Galaxy S5 with our OPPO R7. Although, Samsung’s results are better than our OPPO R7, yet the device is following S5 in a close run. Consult the snaps below for the points and comparison between the two.

Comparing the Scores of Asus Nexus-7 and OPPO R7

Checking OPPO R7 with Asus Nexus-7 in the below images, we get almost the same results. This shows the worth of our OPPO R7 that the device is nearly similar to Asus Nexus 7.

OPPO R7 has a powerful GPU chip of Qualcomm with GPU Adreno (TM) 405. GPU Version is OpenGL ES 3.0, GPU Frequency is 220MHz~550MHz. The display resolutions are (1080*1920). The density per square inch pixels are 480dpi. Amazing part is the Screen normalized score that is much much greater than the acquired score with GPU Benchmark.

Happy moments are those, when you are playing games without breaking and with good graphics. OPPO R7 Review revealed in our testing procedure that the device is efficient enough to run almost any high-end game with perfection. Following games have been tested in OPPO R7 Review.

One thing about this game is that it is network connected and loads the files and stages at the run time. The loaded data from the net is greater than 80MB and the device handles all this data, executes it and keeps them in memory without any fear of low-memory option. As the RAM is 3GB which is great great enough to handle even many games like Contract Killer Sniper at the same time.

Look at the bullet in the second snap moving from my gun towards the person and the flame behind it looks real and attractive. I am a bad sniping killer. 🙂

This is another game with better graphics and awesome target. The blood on striking the person shows the reality of the graphics in the game. You will love the game when the hardware accelerator are better and fluent with smooth move.

Conclusion at the end of OPPO R7 Review:

OPPO is at its best in making smartphones like OPPO R7.