Around 16 million Pakistani went online for the first time in history between 2012 and 2015. This Figure accounts to the overall internet users in the country. The arrival of 3G & 4G in Pakistan has contributed a lot in connecting people and increased the internet penetration from 3% to 15% just in short period of 1 year. Pakistan among top 10 economies in terms of its internet users. Pakistan Ranked 9th Globally for its Booming Digital Economy-UN Reports.

Due to this Pakistan ranked in one of the top 10 economies in terms of the number of people going online during the period. Pakistan ranked 9th on the list as compared to India (1st), Iran (7th) and Bangladesh (10th).

However the Information Economy Report 2017 released by the UN conference on Trade and Development revealed that there are many states in Asia Pacific region that are not ready for digital era. 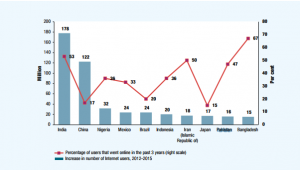 E-commerce is growing fast in Asia. Three of the four largest national e-commerce markets are Japan, China and South Korea. In Pakistan E-commerce is flourishing too with Daraz as the top e-com company trusted by millions of people. The introduction of International chain such as Careem and Uber has also added to the Internet subscriber base of Pakistan.

Moreover e-commerce and other digital applications are helping a growing number of small businesses and entrepreneurs in developing countries to connect with global markets and are generating income.

However report further revealed that more the half of world’s population still remains offline. In least developed countries the internet users are growing slowly.

In order to make Pakistan’s eCommerce industry prosper, the tax imposed on internet should be cut down. Recently Punjab Government reimposed 19.5 Percent Tax on Internet. Punjab has total 60% of Pakistan’s economy but out of utter surprise internet penetration is still as low as 15%. However  Punjab Government, instead of making internet accessible to more people, has imposed 19.5% sales Tax on DSL, 3G and 4G, making it more expensive.

To bring Pakistan from 9th to number 1, government should draft a framework to make Internet accessible to maximum areas.  Government must give tax relaxation to the service providers and at the end to consumer as well to make internet more accessible .

Also Read: These 5 Countries have Fastest Internet Speed in the World