Xiaomi is going to announce a new smartphone series called Pocophone and the first device from this series will be appeared as F1. According to some leaks it will arrive on August 22, but just days ahead of the launch the phone appeared on Geekbench with 8 GB RAM. Now Price & Second Appearance of Xiaomi Pocophone F1 Spotted on Geekbench.

According to Leaks, it will be first launched in India and Eastern Europe. The new leak report suggests that the Xiaomi Pocophone F1 will launch at around €420 for the 6/64GB model and €460 for the 6/128GB version. 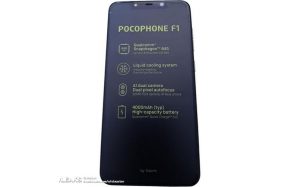 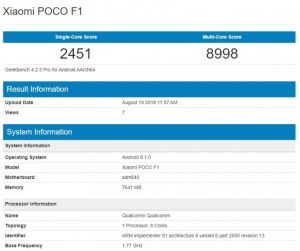 According to new leak, Xiaomi Pocophone F1 is expected to have a 5.99 IPS LCD with a notch on top. You will experience a vertical dual camera setup, coupled with a fingerprint scanner On the back of the phone. The rumors also suggest that powerhouse will carry a 4,000 mAh battery. The phone is expected to come with the chipset of Qualcomm, if it is true then it should support at least Quick Charge 3.0.